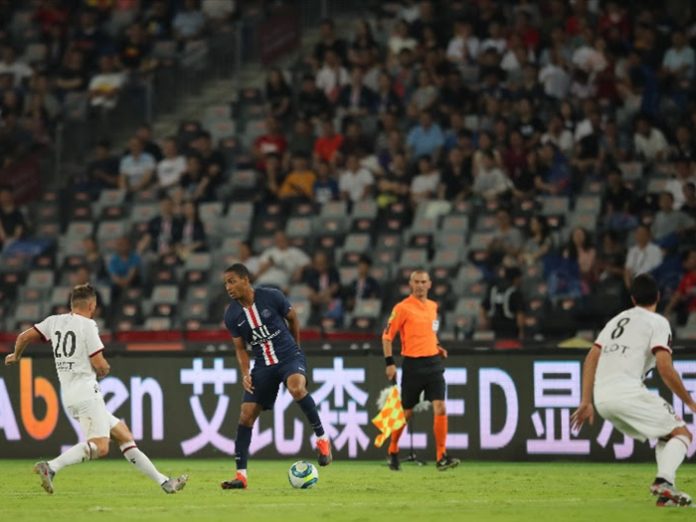 The Trophée des Champions returned to Shenzhen, China on 3rd August, for its 24th edition, which saw Paris Saint-Germain go head-to-head with Stade Rennais. This is the second year that the French Super Cup has been held at the Shenzhen Universiade Centre.

Absen was the exclusive and official LED display supplier of the event, providing 200 panels of perimeter LED and onsite support throughout the event.

The game, which was attended by over 31,000 spectators, saw the defending champions Paris Saint-Germain retain their title following a 2-1 win, making it their seventh Trophée des Champions title in a row, and their ninth overall.

The company in charge of onsite management, Kaisa Culture & Sports, selected Absen’s 9mm resolution LED perimeter display system for the event, which was installed around three sides of the pitch and used to play adverting and sponsorship content throughout the game.

In 21st Century arenas and sports stadiums, where sponsors and their advertisements are a major cog in the football machine, LED perimeter displays have become integral to the overall stadium infrastructure.

Featuring a high level of contrast ratio, refresh rate and greyscale, as well as outstanding viewing angle, Absen’s UEFA-standard sports display solution is able to maximise the value for the sponsor partners. The LED panels also boast IP65 waterproof design and player-protective details such as the soft module mask and mat.

“The event was a great success”, said a representative from Kaisa Culture & Sports. “The LED system performed very well and the Absen team were extremely professional, showing a deep understanding of our needs and ability to get the job done. We really appreciate the hard work put in by Absen and look forward to future cooperation.”

“In order to achieve the best results, the Absen team have been working very closely with the organisers, as always,” said Allen Lv, Absen sports engineer onsite. “We monitored the system closely and performed multiple tests before the game was played in the evening. I’m very proud that the Absen system performed well and sponsors’ content was delivered smoothly.”