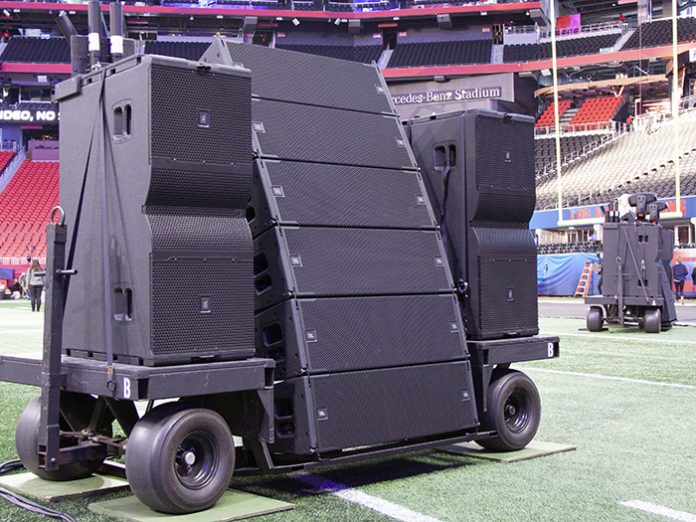 ATK Audiotek specialises in providing audio systems for live television shows and major events like The Voice, Jimmy Kimmy Live!, the Super Bowl, the Grammy Awards and more. They also have a thriving integration business, and install audio systems for some of the world’s leading tech and retail companies. In order to raise the bar from previous successful Super Bowl and Grammy Awards shows, ATK plans to deliver premium audio quality at these upcoming major events with industry-leading JBL VTX Series A12 and A8 line array speakers.

“The VTX A12 is the best speaker JBL has ever made, and it plays a significant role in our current inventory,” said Michael MacDonald, President, ATK Audiotek. “Two of the most important aspects of a speaker’s performance are coverage and a flat response. The A12 is consistently excellent in both of these areas. We’ve added 192 A12 speakers to our inventory since the 2018 Grammy Awards, and they’ve been warmly welcomed by our engineers and technical staff.”

ATK is currently installing and fine-tuning every aspect of the sound systems to be used at Mercedes-Benz Stadium for the Super Bowl, one of the most ubiquitous entertainment events in the world. The VTX A12’s ease of deployment plays a huge role in enabling the ATK team to quickly deploy the speakers on and off the field for the highly anticipated Halftime Show featuring Maroon 5, Big Boi and Travis Scott.

“The Super Bowl is an interesting production—everything people hear from the time they enter the venue is under our control, including the Halftime Show,” said MacDonald. “We have A12s loaded on carts to roll out on the field for the Halftime Show, and NFL groundskeepers are very happy that the carts won’t damage the field’s playing condition thanks to the speaker’s lightweight and compact design. Also, we don’t want to block fans’ field of vision. We achieve less obtrusive sight lines with the A12s so that the speaker stacks don’t interfere with views from the lower bowl seats.”

In addition to the Super Bowl Halftime Show, ATK Audiotek will also rely exclusively on VTX A12 speakers to provide premium full-range sound reinforcement for the Grammy Awards on February 10 at the Staples Center.

“When we’re doing a show like the Grammys in an arena, we need a very powerful and precise sledgehammer to do the job,” said MacDonald. “We need a lot of volume to compete with room noise, and we have a huge audience we need to cover. The A12 is excellent in that regard for its predictable pattern control, which helps us provide excellent coverage without feedback.”

“A show like the Screen Actors Guild Awards requires a lot of finesse, because it’s in a smaller room and the PA is much closer to the audience,” said MacDonald. “The VTX A8 speakers are both high-powered and compact, with significantly more balanced output and better pattern control than other speakers we’ve used in the past. Another benefit of using the A8s is we save the show producers a bunch of valuable theater space by using less subwoofers.”