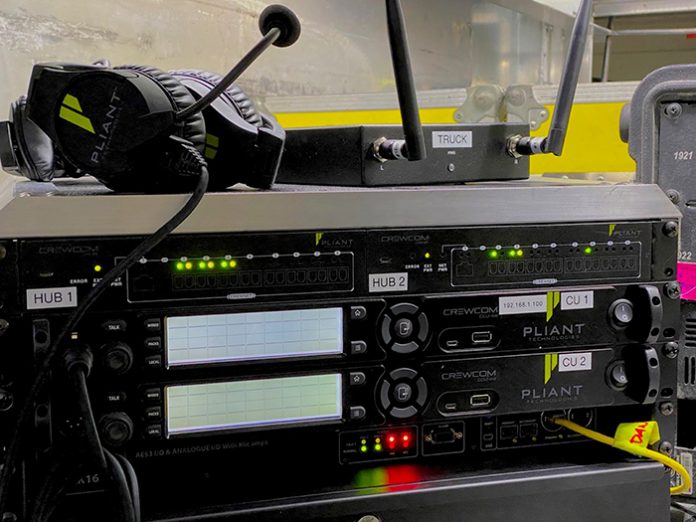 As technologies advanced and productions grew more complicated, the duo found they were outgrowing their traditional analog wireless system, which was difficult to deploy and did not provide enough coverage. During their search for a replacement wireless intercom, they found exactly what they were looking for with the CrewCom 900MHz system.

For TNF, AY Productions deploys 16 Radio Packs (RPs) and 14 transceivers (antennas) to provide a reliable and extensive coverage zone. “Our entire RF coms system is CrewCom—we don’t need any third-party networking equipment,” said Aaron. “Everything is included within one ecosystem, which is a big advantage. The antennas connect via a single strand of fiber, so we place those all around the stadium, wherever coverage is needed—and we know it will always work. Users can walk around from zone-to-zone with seamless coverage including the tunnels, locker rooms and truck compound.”

A standout feature for Young and Andy is the system’s ease of deployment, which is especially important for mobile productions. “CrewCom really streamlines the setup for us – it’s essentially three products in one: intercom, audio transport, and wireless PL,” said Andy. “In our old configuration, we had to transport analog audio to sets both inside and outside the stadium where there would be racks of different RF equipment. Now the only thing we deploy away from the truck is the transceivers. The control units and all interconnections are positioned within the compound, which is a huge advantage for us. Additionally, the CrewCom packs have far superior audio quality to other manufacturer’s intercoms.”

According to Aaron, another benefit of CrewCom is the ability for the system and packs to all be centrally controlled from the production truck using the supplied CrewWare software. “We deploy this system throughout all departments of the production team. Each individual user has their own profile and I can manage everything I need live from my desk. Being able to control everything from the truck provides us with a multitude of benefits, especially not having to run out and make physical adjustments directly on the radio packs or base stations.”

During their time working with the CrewCom system, Aaron and Andy have been both impressed and appreciative of the customer service they receive from the Pliant team. “Art Gonzales from Pliant Technologies has been a huge help to us,” adds Young. “We work very closely with him and his team to deploy this system for TNF, and the support we receive from the manufacturer is unparalleled.”

During the Houston TNF game, AY Productions was also part of the first large scale synchronization of two CrewCom systems, where two fully independent systems were deployed simultaneously using Pliant Technologies’ sync function. A CrewNet connection was sent from the existing NRG house system, used for game production activities, and connected to the AY Productions control unit. This allowed for the RF frequency hopping to be synchronized and coordinated, ensuring both systems could work in conjunction with each other.

The team plans to continue to rely on the CrewCom system for all of their live production needs. “We’re looking forward to integrating CrewCom on future shows. The ability for us to pre-configure the kit for each show saves us a lot of time on these complex projects,” said Andy. “Overall, CrewCom offers a huge improvement in coms technology—we couldn’t be happier with our choice to deploy this system.”