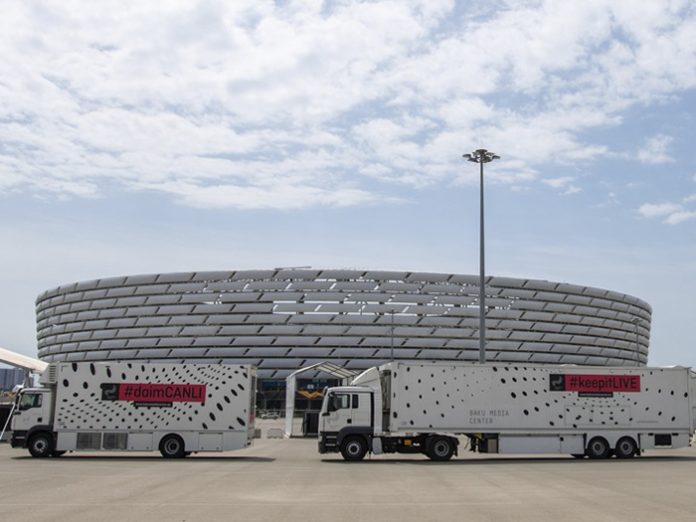 The Azerbaijan capital Baku hosted the UEFA Europa League Final between Arsenal London and Chelsea. BT Sport Channel broadcasted the all-British final with the help of local Broadcast technology provider Baku Media Center together with Sunset + Vine production company. For the final, Baku Media deployed its mobile production fleet, all developed by Broadcast Solutions. BT Sport, one of the largest telecom providers, will screen the game on their channels plus a free stream on YouTube in UHD.

Broadcast Solutions, Europe’s largest OB Van manufacturer, has a long-lasting relationship with Baku Media Center. The German company has delivered several production vehicles, including a 16 camera Streamline S16 trailer plus support vehicle and DSNG. In April 2019 and just in time for the UEFA final Broadcast Solutions delivered an additional 12 camera OB plus supporting truck to Baku Media Center, that was also used at the UEFA Europa League final.

The new OB truck is based on the Streamline S8L design. Streamline OB Vans are pre-engineered production vehicles and with over 40 units sold the most successful OB Vans on the market. Because of the adjusted Streamline concept the S8L offers three dedicated rooms in a box-body combination with 10-12 workplaces and works with up to 12 cameras. For customer Baku Media Center Broadcast Solutions combined the OB Van with a supporting truck of the same size plus generator trailer, thus offering maximum flexibility in the field.

For the Europa League final, Baku Media Center provided service with the two OB Vans to cover the action from the field and a unique studio. The signals were aired to the satellite using a Broadcast Solutions special-built DSNG unit with a four-wheel-drive SUV, developed for Baku Media Center.