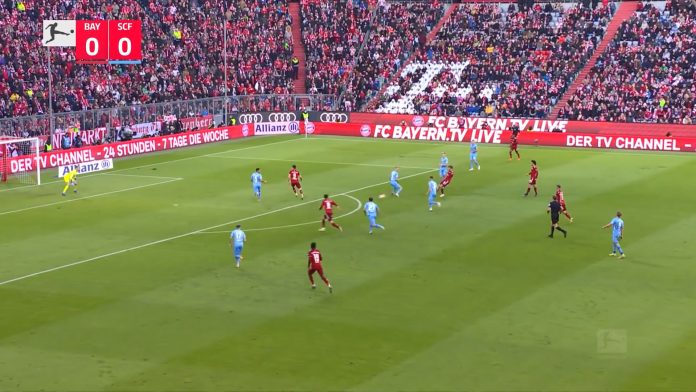 As they push for an unprecedented 10th Bundesliga title in a row, Bayern Munich have contracted stadium technology specialists, ADI, to supply the new LED perimeter system at The Allianz Arena.

The contract sees ADI installing over 370 linear metres of digiBOARD digital perimeter, including a full 252m camera arc and an additional 120m second row along the camera-facing touchline. ADI have installed the system which was used for the first time in Bayern’s first home match of the season against FC Köln on 22nd August.

In addition to the digiBOARD hardware, ADI are providing their proprietary digiSOFT control software to operate the system. ADI’s Studios Division will provide ongoing content support in the form of a weekly Quality Control Service for club content. With 15 years of experience in creating engaging digital perimeter advertising ADI will also be the preferred creative partner for any club and commercial partner perimeter content throughout the course of the contract.

The second row has been positioned to provide a seamless view from the camera gantry, allowing the club to utilise the space for separate content or to create a single, giant “Mega Banner” of content.

ADI pioneered the Mega Banner concept with their installation at Wolverhampton Wanderers in 2019 and their ADI’s digiSOFT software intelligent scaling to ensure the image retains its size and shape as the camera pans across the pitch.

James Robinson, Chief Operating Officer at ADI, commented: “As the dominant supplier of LED technology to the English Premier League, ADI are delighted to announce this multi seasonal contract with Bayern Munich.

“ADI empower our customers in the Sports and Entertainment Industries by providing innovative digital platforms and production services allowing Federations, Brands, Clubs and Events to directly engage fans and consumers.   Through ongoing product innovation, trusted relationships and high levels of service ADI have supported our customer’s growth and success for over 30 years.

“For a club of Bayern Munich’s stature to recognise ADI as their supplier of choice naturally reflects our market position and supports our continued strategic growth outside the UK.   I am delighted that we can now include one of the most well respected football clubs in Europe among our long term customers.”