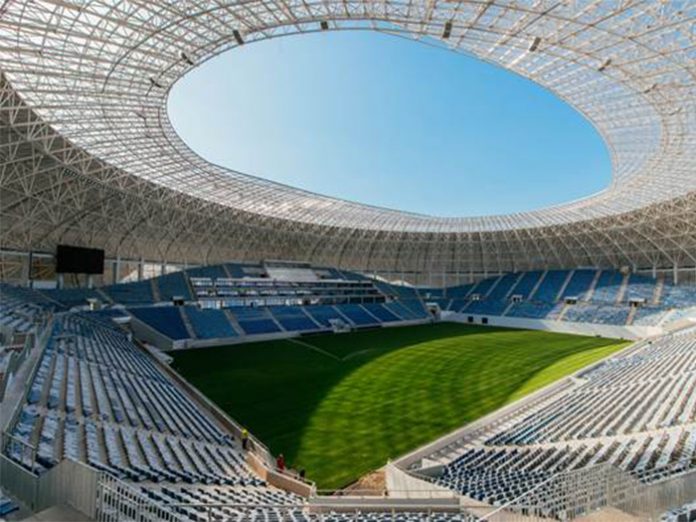 Ion Oblemenco Stadium in the Romanian city of Craiova is the country’s most modern football arena at a capacity of over 30,000 seats. The futuristic stadium, inspired by the art of Romanian sculptor Constantin Brâncuși, was built from the ground up over the course of two-and-a-half years at a total cost of 51 million Euros. It is home to football club CS Universitatea Craiova.

Hosting international and premium league matches not only in the Romanian capital of Bucharest, but also in the city on the river Jiu. For this reason, the municipality of Craiova required a stadium security solution on par with stringent guidelines – according to the year 2020 European football championship standards – to guarantee safety during mass events.

Looking for a trusted vendor with sports stadium experience, plus the ability to deliver the majority of necessary equipment as a single point of contact, Craiova officials opted for Bosch. Working closely with the on-site team, Bosch experts installed a fire and safety solution composed of four fire panels and 1,500 detectors. The stadium also received a quality sound system with Electro Voice Pro Sound speakers for music and commentary, Dynacord Promatrix for evacuation, Bosch loudspeakers for interior sound, as well as a conference and interpretation system for the pressroom.

Craiova officials are satisfied with the easy-to-use and cost-efficient solution. Because Bosch products fulfilled international guidelines, the stadium is now fully certified to host matches of the First Romanian Football League, European league matches, Champions League and national team matches. As the first stadium in Romania constructed in line with guidelines for the 2020 European football championship series, Ion Oblemenco Stadium serves as a model for future stadium projects planned to be built for the 2020 tournament and beyond.