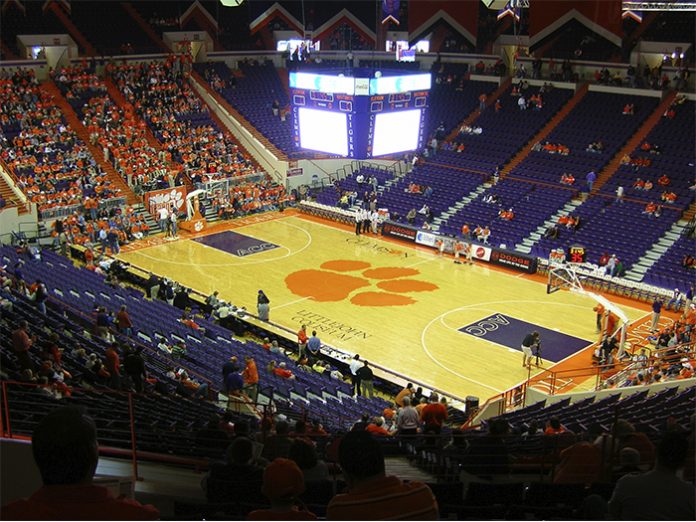 The Littlejohn Coliseum at Clemson University, home of Clemson men’s and women’s basketball, in addition to occasional convocation events, was recently the subject of a massive $55-million-dollar renovation – including an overhaul of the Coliseum’s A/V systems.

The centerpiece of the new audio setup is a RoomMatch system from Bose Professional. The system was specified by Audio System Consultant, Jim Brawley, who was contracted by the Project Architect, Greenville, SC-based firm LS3P.

Jim, a Clemson, SC, resident and himself a Clemson graduate and longtime fan, experienced another RoomMatch system at the nearby Bon Secours Wellness Arena in Greenville, which was hosting Clemson home games while the Littlejohn Coliseum was in the initial stages of the renovation.

He noted, “I have been pleased with RoomMatch in other installations I have been involved in, and then I got the chance to observe the performance of the system at Bon Secours, which confirmed to me that it was the appropriate product for these renovations at Clemson. RoomMatch offers a high level of performance and a great value for a system of this nature, with better coverage and more power than other comparable product lines.”

The biggest challenge was to suspend the loudspeakers near a catwalk, which was necessary for maintenance access, as boom lifts for rigging were banned after renovation.

Jim recalled, “We had to locate the clusters in a position where they could be raised and lowered with chain motors from the catwalk, which was a unique hurdle, but we were able to accomplish it relatively easily with the support of Bose Professional field personnel. We were also able to use existing wiring that was in place from the previous system without having to run new wires for the most part, which was a blessing. The system is a real success, with highly directed, focused sound providing smooth coverage for all seating areas. Response from the school’s athletic department and fans has been very positive. I’m proud to help contribute to such a successful project for my alma mater.”