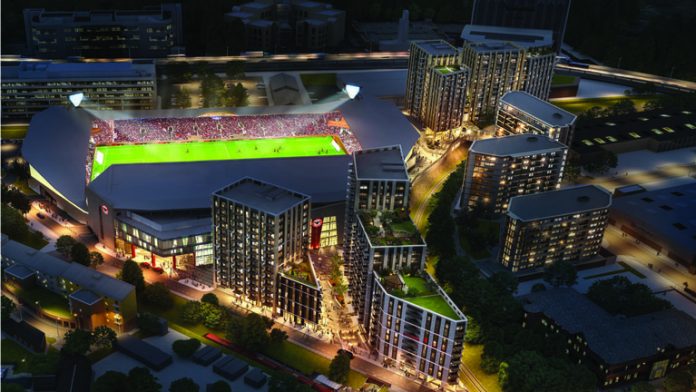 The planning amendments for the Brentford Community Stadium have been approved by the London Borough of Hounslow’s (LBH), meaning that work can begin as early as February 2018.

The amendments, which comprise of changes to the stadium design and residential sites, were submitted in September 2017 by Lionel Road Developments and Kew Bridge Gate Developments on behalf of Brentford Football Club and its development partner Be Living.

Cliff Crown, Chairman of Brentford FC, said: “This decision by Hounslow Council is a great early Christmas present for fans.

“We now hope to be in a position to begin stadium construction in February 2018, following completion of a revised agreement with LBH on our obligations and will share more details with fans on the stadium build phase early in the New Year.”

“We’re all very excited to be part of creating a vibrant new community that hopefully acts as a catalyst for positive regeneration in the local area.”

The design amendments of Brentford Community Stadium, which is set to hold 17,250, include upgrades to the media, broadcast and lighting facilities, with the aim to meet Premier League football and Premiership rugby standards.

The residential element of the scheme includes 487 new homes, which will be a mixture of apartments for rent and purchase, and designed to meet the housing needs of the local area.

Brentford FC’s Community Sports Trust offices will now be located in purpose-built facilities alongside the stadium.

The project team for the new stadium includes Arup and M&E consultant with Arcadis, as well as Manchester-based architects, AFL.