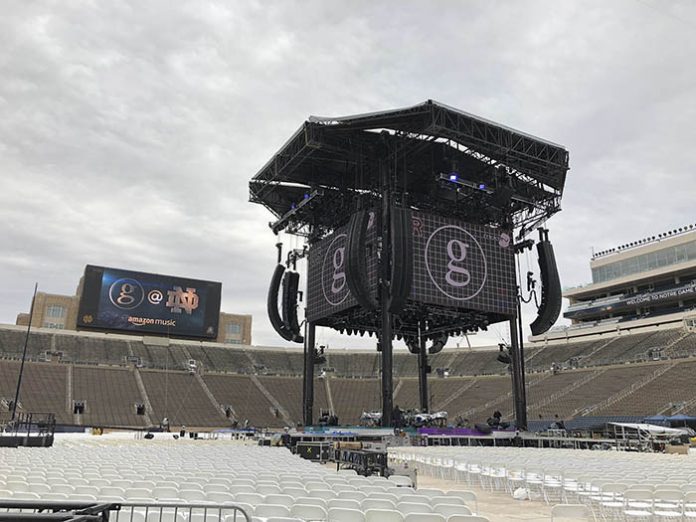 The moment Garth Brooks made his appearance in front of 84,000 fans at the sold-out, first ever concert at Notre Dame stadium, there was no doubt something historic was in the air – that and a whole lot of cold rain, wind and even a little snow. In fact, the high winds were strong enough that the production team had to coordinate with local and university meteorologists to evaluate and maintain the safety of the staging. Dan Heins, FOH engineer for Garth since 1989, described it, “By four o’clock in the afternoon, just hours before the show, we still didn’t know if the concert would go on. We ended up doing soundcheck with the PA on the ground. The wind finally let up, so we were able to raise the speakers. Thankfully, after all the weather drama, Garth’s show went on to become something for the ages.”

Though the show was delayed by an hour, nobody cared once the sound of Garth’s latest hit, “All Day Long,” radiated through Garth’s exclusive Clair Brothers PA. After the song Garth Said, “Hello, Notre Dame! We’ve been waiting for this for a long time. How y’all doing?” Thunderous applause amid tens of thousands of unadulterated screams more than answered his question.

Part of the show’s magic was the star-shaped stage with a 360-degree rotating centre stage on which Brooks and his band performed – a theatre-in-the-round concept where Garth moves freestyle around the periphery playing to each side of the stadium. While playing one of his greatest hits, “The River,” the audience sang along with the chorus, setting an entrancing mood throughout the stadium. Cameras rolled as the multitude’s massive singular voice was recorded – a recording that will be mixed in as part of the TV special, Garth: Live at Notre Dame! – to be aired nationally on Sunday, December 2nd on CBS at 8:00 pm EST. “After this show sold out, I thought it could not get any more exciting than this,” Brooks said. “Then, CBS calls and in an instant, the show becomes bigger. This changes everything!”

Garth recently announced his plans for a three-year stadium tour starting in early 2019. The confidence he has in playing such huge venues is born from his record-breaking, recently completed three-year arena tour that sold over 6.3 million tickets, often in multi-night, multi-show runs per city. The plans for the stadium tour sound system are simply augmentations and adaptations from the successful sound design from the arena tour. According to Dan, “The Clair Brothers PA consistently sounds great, year after year. And I can say the same thing about Garth. He pushes himself to deliver his best every time he performs.”

The fundamental core of the stadium rig is the Clair Brothers i218 line array system that has been increased in size to cover stadiums in-the-round. The Notre Dame concert used a total of 96 i218 array cabinets and 48 i212 cabinets in the main array hangs, all eight hangs with identical equipment. The layout for the stadium effectively utilised two different array hang configurations depending on whether the array was facing the sideline or the end zone. Josh Sadd, sound designer for the tour, said, “The Notre Dame stadium, while obviously great for football, has a bright future for concerts. The rake of the seating is very amphitheatre-like which is acoustically very musical sounding – a great feature!”