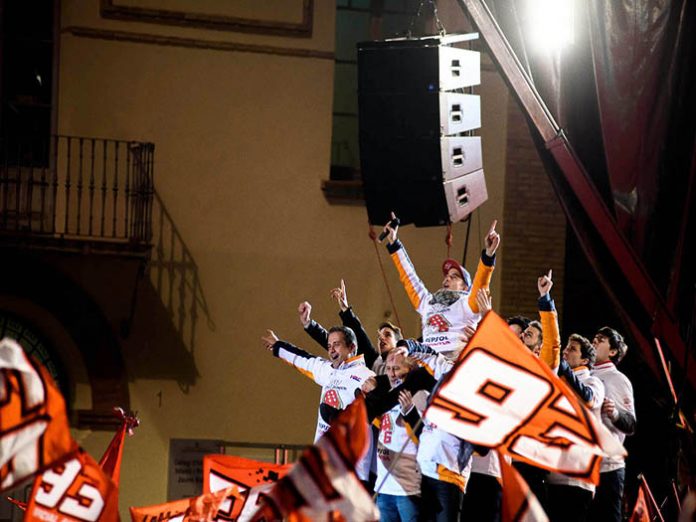 VTècnics, which offer products and services in sound, lighting, projection and full-scale musical production, utilised Clair Brothers C12 as its main P.A., putting it to the test at the Moto Grand Prix World Championship.

Juan Carlos Álvarez, VTècnics stage systems engineer, explained: “We’re honored to have been selected for the 2017 celebration of the winner of the Moto GP championship, rider Marc Marquez from our home country of Spain.

“Events like this come with unique challenges, and it’s always best when our equipment works at the height of its potential. Which is what the C12 does – like a champion.”

For the event celebration, VTècnics hung four C12 speakers on each side of the stage, three of which with a 90º horizontal coverage pattern and the fourth bottom speaker at 120º. The audience area was not so large but was crowded with thousands of Marc Marquez fans and their noisy motorbikes, so for additional coverage in an effort to further overcome the background din, two Clair Brothers iS218s were positioned under the C12s on both sides.

The Moto GP promoter and its attendees were more than pleased. While attendees celebrated their new champion, and hung on every word he said, the promoter was provided with necessary peace of mind in knowing that VTècnics, with its reputation for always bringing their A game, would do just that. And they did, with Clair Brothers doing the same.