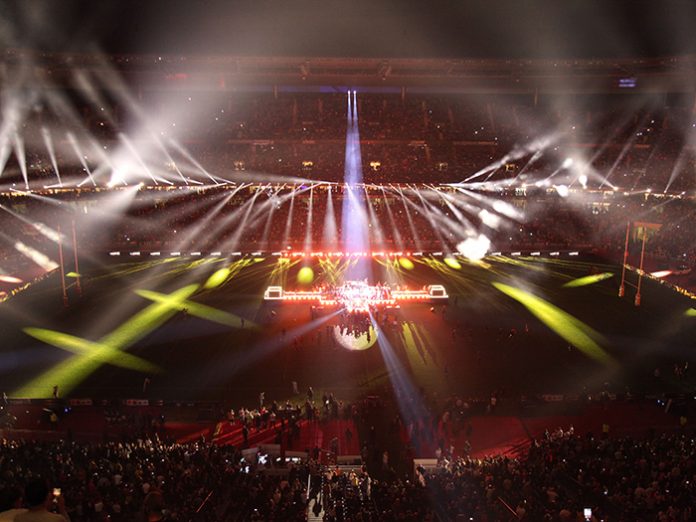 All eyes were on the pitch at the Stade de France even after the finals of the French National Rugby League’s Top 14 concluded on June 15. French hip-hop brother duo Bigflo & Oli closed the event playing to packed stands as a large complement of Claypaky fixtures illuminated their dynamic set.

The Top 14 competition has been played in France since 1892 and features 14 participating teams, hence its name. The choice of Bigflo & Oli to entertain fans at the finals must have seemed inspired since the rugby champions and the rappers both hail from the city of Toulouse.

With its rotating front lens and the ability to control each single LED individually Claypaky’s new HY B-EYE K25 can create spectacular kaleidoscopic projections and dynamic effects. The versatile fixture acts as a high-performance LED wash light, a perfect beam light and a visual effects projector, all in one. It is twice as powerful and bright as earlier B-EYE models and offers greater interactivity.

He positioned 19 K25s at the ground around the edge of the field. “The power of the fixtures’ projector allowed me to alternately coat the lawn with solid colours or play their powerful beams tight in the bottom,” said Damien. “Even at 40 meters, they did the job.”

Sharpys, located at the same positions, were chosen for their “bright and precise” beams, according to Damien. “The images they made on the lawn were perfect. When used for motion effects they also came out very well in the background of the axis cam.”

Damien also placed 32 Sharpy Plus fixtures on the edge of the stage. Claypaky’s Sharpy Plus is a true hybrid unit whose two independent operating modes serve as a perfect beam light and perfect spotlight that’s suitable for every occasion. The lightweight fixture is slightly larger than the Sharpy to house the high-quality optical unit with a zoom range from 3 to 36 degrees, which covers the entire range linearly both in spot and beam modes. This feature makes the Sharpy Plus unique on the market.