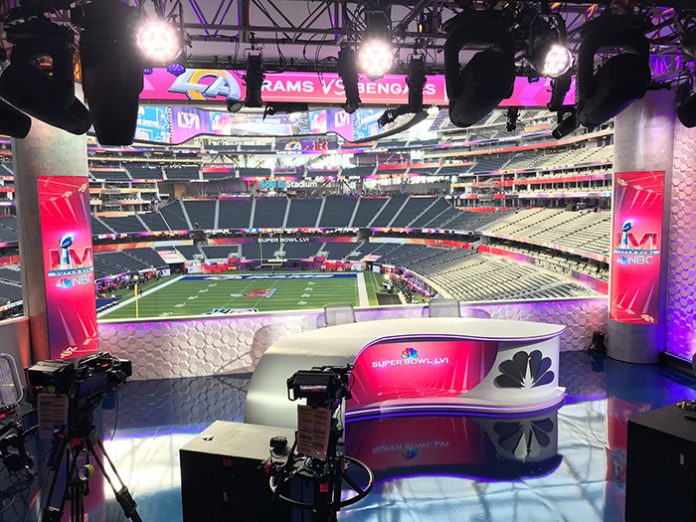 Creative Technology supplied Elation broadcast lights to Lighting Design Group for use on sportscast booths and stages in and outside of Sofi Stadium during Super Bowl LVI in Los Angeles in February. Dennis Size, Executive Vice President of Design for Lighting Design Group (www.ldg.com), was responsible for the overall lighting design and turned to Elation Fuze Profile CW™ and KL Panel™ luminaires for key, fill and wash lighting.

Multiple stages scattered around LA provided pre- and post-game coverage while promoting the city and shows for client Comcast. This was the fourth Super Bowl in which LDG has been involved and was Size’s second time working a Super Bowl. Having used conventional fixtures at the Super Bowl in Minneapolis four years ago, he says their inflexibility led him to request more moving lights for this year’s plot. ““That’s what drove the design concept of a moving light rig. At the Minneapolis Super Bowl, we were forced to do a lot of last minute re-focusing — inefficiently wasting time and requiring additional crew. In L.A. I wanted to be able to make changes rapidly and avoid the studio L.D.’s having to always grab a ladder to make repairs and re-focus.”

Size turned to technology services provider Creative Technology (www.ctus.com), part of the NEP Group, for a solution. CT’s Christopher Hibbard had introduced the Fuze Profile CW to Size a couple of years before on a presidential event. “It is a very practical fixture and the price point is excellent,” says Hibbard of the LED framing fixture that CT’s Chris Wasilauskas and Ian Dobson had worked closely with Elation to develop. “But it also has value from a design standpoint. I have designed with them on trade shows and corporate shows and it fulfills 95% of what you need to do.” He underlines that they are ideal for broadcast projects where budgets are often very tight. “If a client is looking for an LED Leko, I tell them that for just a bit more they can have a moving head with all the flexibility that gives.”

Size adds that on jobs like the presidential event you often end up with a lot of moving lights, which makes for an expensive rig. “As a designer, I want to get the best possible design I can but also be as financially efficient as I can for our clients. Chris suggested I try the Fuze and it was quite successful. When you’ve used a light successfully, you’re more apt to turn to it again.”

And that’s what the designer did for the Super Bowl booths and stages. No longer concerned with whether or not the Fuze lights would work and be reliable, he was more concerned with a persistently bright Southern California sun. “The bright sun was our major concern so I needed some firepower,” he explains. “We used the Fuze on several stages but then raised the base illumination with softlights and chose the KL Panels, which I have found are very efficient and very bright.” “We thought we needed to raise the intensity level but were all pleasantly surprised that the Fuzes did such a great job.” Arc source luminaires were also employed on several stages.

Some 70 Fuze Profile CWs were used across all the stages for key and fill lights (Creative Technology stocks 200 of the fixtures) with 21 KL Panels used for wash and eye lights. Stages with Elation lights included the Main Stadium Stage, the Stadium Clicker Stage, the Telemundo Stadium Stage, Lakeside #1, Lakeside #2 and the Tailgate Stage. At night, one of the lake stages was also used for Olympic coverage.

Size appreciated the Fuze Profile’s more economical form factor, saying that top shelf moving lights often have a lot of options that he may never use but still have to pay for, or wasn’t able to procure them at all because of the cost. “The Fuze has the functionality of a Leko, but brighter — and able to pan and tilt — lighting the talent as the director moved them around. That’s exactly what I needed. The Fuze is a solid, bright light, with great color rendering, and a good shutter assembly, that moves well AND IS QUIET.”

Another important fixture used across many of the Super Bowl stages was softlight illumination. Chris comments that many of the more popular softlights in use today are too bulky and with more broadcasts happening in smaller spaces with limited ceiling heights, a more compact form factor is often required.

“The KL Panel has a really nice profile, short and contained that allows it to more easily fit in a tight space. Even with the barndoors on the form is quite small.” Nevertheless, it is the fixture’s easy-access encoders on the bottom of the fixture that he finds exceptionally useful. “We were asked to provide a couple of lights for the makeup room and the easiest thing was to grab a couple of KL Panels,” he recounts. “The ability to easily dial in intensity, CCI, etc. via the knobs on the back panel made it incredibly user friendly.” Size agrees, stating, “For someone who deals almost exclusively with broadcasting, that is almost a requirement for what we do. Often we’re using these instruments in places where you need to adjust it at the light and next to the camera. It’s an excellent feature.”

The KL Panel is a full-color-spectrum panel with stepless color temperature adjustment from 2,000K to 10,000K and high CRI and TLCI indexes. Additional color tuning is possible through a green shift adjustment and a virtual gel library. It houses an efficient RGBW + Lime + Cyan LED array and outputs 24,000 lumens for wonderful soft white or full-color washes.

Elation was delighted to contribute to a successful Super Bowl production in its home base market of LA and is grateful for the cooperation with CT and LDG. Size concludes, “Over the years, we’ve come to find that Elation has raised the bar on technology and quality of product and I’m happy to use the fixtures. Many designers who didn’t know the lights until the Super Bowl were pleasantly pleased and we were even surprised how great they performed.”