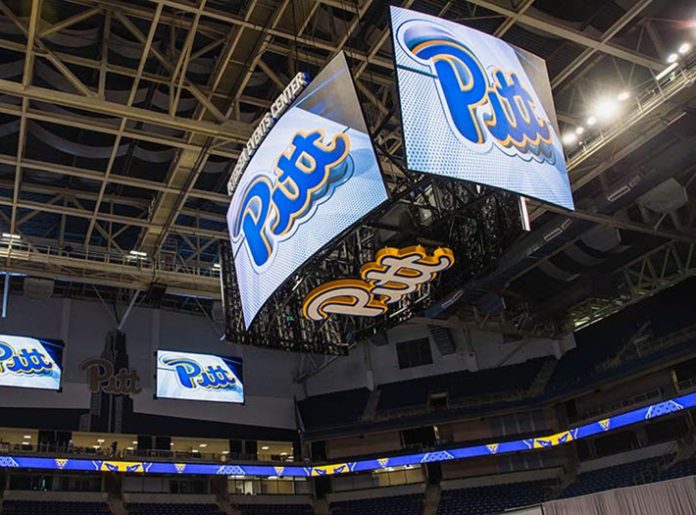 Daktronics has partnered with the University of Pittsburgh (Pitt) to deliver new LED video display technology to multiple athletic facilities on campus in Pittsburgh, Pennsylvania, including the first centerhung in collegiate sports featuring less than four-millimetre LED line spacing.

“Thanks to a great partnership with Pitt Sports Marketing and our JMI Sports team, we have installed video boards that should help us create one of the best in-venue viewing experiences in all of college basketball,” said Pitt Director of Athletics Heather Lyke. “When you combine the Oakland Zoo, the court flip, the addition of public Wi-Fi and now this video component, our commitment to enhancing the game-day experience for our fans is absolutely being realised.”

The Pitt men’s and women’s soccer venue, Ambrose Urbanic Field, now has a new video display at the end of the field measuring 17ft high by 30ft wide and featuring 10-millimetre line spacing.

These displays are capable of variable content zoning allowing them each to show one large image or to show any combination of live video, instant replays, up-to-the-minute statistics, graphics and animations, and sponsorship messages.

“Daktronics is very proud to continue our long-standing partnership with the University of Pittsburgh,” said Scott Willson, Daktronics sales representative. These new displays will have a tremendous impact in informing, entertaining and engaging fans, sponsors and student-athletes across the campus.”

In addition to the equipment installation, Pitt will be receiving custom digital content created and delivered by Daktronics Creative Services.