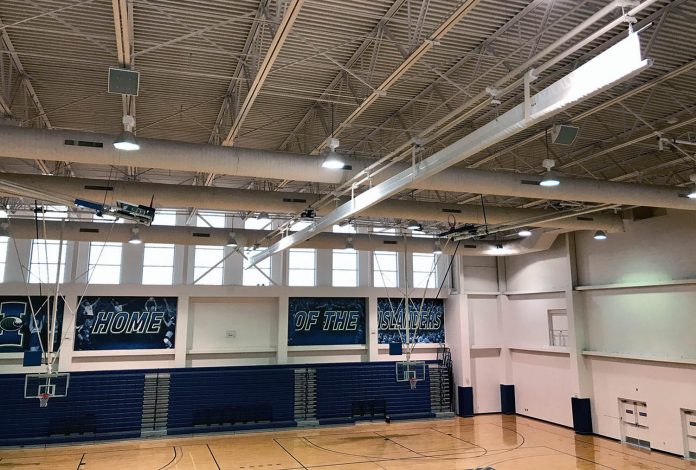 Texas A&M Corpus Christi’s Dugan Wellness Centre hosts all of the Corpus Christi Islanders men’s and women’s basketball and volleyball games, as well as cheer & dance competitions and campus events and speeches. Its deep bleachers and roll-in seating fill with students and supporters on game days, but until recently, they weren’t able to hear announcements very clearly or enjoy full-fidelity music.

The anaemic sound reinforcement system had too many drivers in a very reverberant space and not enough bass. The Corpus Christi office of Texas-based A/V integration firm NCS remedied that on an incredibly tight budget with a Danley Sound Labs retrofit that uses just six Danley SM-80 loudspeakers and a single Danley TH-118 subwoofer. “They had been having problems for quite a while,” said Mike Keadle, NCS AV division manager for the Corpus Christi region. “The previous install appeared to have been done by someone with just enough knowledge to be dangerous. There were a dozen loudspeakers of mediocre sound quality throughout the space with massively overlapping coverage patterns and blown drivers. Intelligibility was almost non-existent. We came, evaluated their space and drafted a plan that would use Danley Sound Labs products to meet their high expectation within their tight budget.”

He continued, “If there are thousands of loudspeakers out there on the market, I’ve used 999 of them and of all the loudspeakers I’ve used, Danley has the best clarity hands down. No one else touches it. And I like the company, too. The people there have a lot of integrity. It’s an unashamedly Christian company. On top of all that, Danley’s output efficiency and pattern control mean that I can solve a problem like this with vastly fewer boxes. That was key to keeping this project within budget while still giving them truly excellent results.”

The setup is straightforward. Two Danley SM-80 loudspeakers cover each side of the court (four total) and two more SM-80s cover the court itself and the roll-in bleachers at either end. A single Danley TH-118 flown above centre-court fills the room with honest bass. Remaining faithful to the budget, Mike determined that they could repurpose existing QSC amplifiers by adding an inexpensive Biamp AudiaFlex DSP. “Everyone is very pleased,” Mike said. “I walked the room with the gym director and they brought in their game-day announcer. He has a deep voice that was routinely high-passed by the old system. Everyone was surprised at how great his voice sounded with Danley’s pattern control and how deep it sounded with the Danley subwoofer in place. They were excited to have the next dance or cheer competition because the room’s bass response would finally measure up to expectations.”