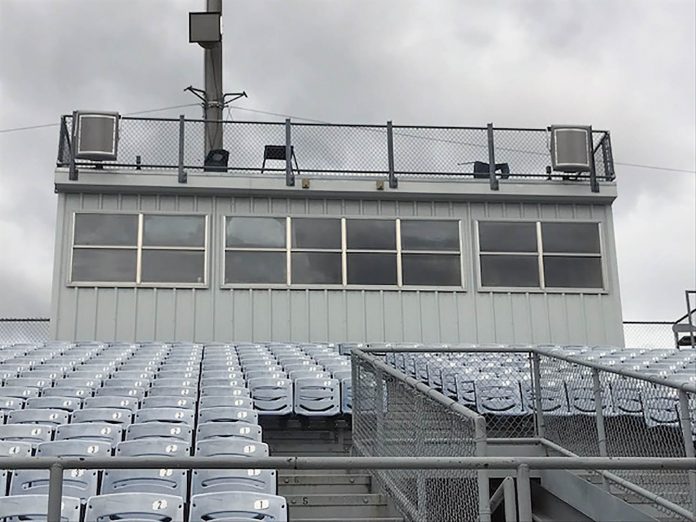 Crisp County High School serves 1,100 students in Crisp County which is located in south-central Georgia. Seeing a Crisp County Cougar football game on a fall Friday night is the main event in town, and its football field seats upwards of 5,000 energised Cougar fans. After a recent lightning strike toasted the field’s ageing sound reinforcement system, local A/V integration firm Johnson Electronic Systems installed a new system based on four Danley OS-80 fully-weatherproof loudspeakers and a four-channel Danley 5K4c amplifier.
“The day before the opening home game this past fall, I went over to the Crisp County ball field and tuned up their sound reinforcement system,” explained Mark Johnson, vice president at Johnson Electronic Systems. “But that night, a severe storm rolled through. It wasn’t until the next day, just thirty minutes before the game that they realised their system had been struck and was inoperable. I raced over with some spare amps and got them patched up well enough to get through the game but it was clear that they needed a new system in a hurry.”
Mark had recently installed Danley loudspeakers at a high school football field in Lee County and had witnessed firsthand the vast improvement in intelligibility and musicality the Danley system gave them. “I told Crisp County about the Danley products,” he said. “In addition to the amplifiers, they agreed to replace their loudspeakers which had been performing poorly for quite some time.” Scott Floyd of High Road Sales of Cleveland, Georgia, the area Danley rep, facilitated the sale and made sure the pieces were in place in time to cover the next home game.
“The Danley OS-80s produce a lot of output, and it’s crystal clear and remarkably even,” Mark said. “And they come with a three-year warranty. Any company that is going to present a product with such a huge warranty must truly stand behind it.” Mark placed all four OS-80s on the home side in a distributed array that fires across the home stands, across the field, and over to the visiting side. The single, two-rack space Danley 5K4c amplifier not only delivers four channels of 1250W/channel amplification, but it also includes on-board DSP that handles all of the input conditioning and loudspeaker conditioning. Mark was able to program the amplifier so that meddling fingers couldn’t turn the system up and risk damage to the loudspeakers.
“They’re super excited about the new Danley system,” Mark said. “It hasn’t been this loud in over a decade, and it has never sounded this good. Ultimately, they could use a couple more to really have the ideal system for their space, but the improvement is so big that they’re happy enough for now.” Perhaps inspired by the new sound system, the Crisp County Cougars had a nearly undefeated season in 2016. They lost their last game -on neutral turf-, which unfortunately cost them a trip to play at the Georgia Dome in Atlanta.
https://www.danleysoundlabs.com/