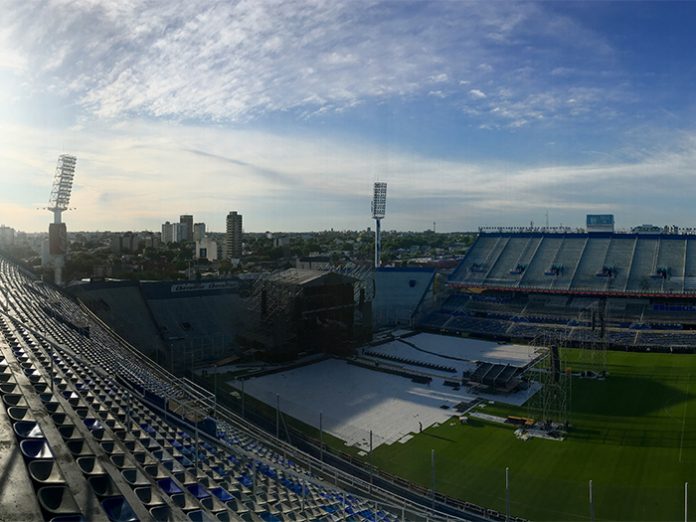 When the American punk rockers of Green Day arrived at the Velez Stadium in Buenos Aires after their yearlong world tour, audience, crew and band were in for a real treat and an audio first. There, the PA was the d&b SL-Series, GSL System, the brand new member of the d&b large format PA family making its South American debut. BALS Buenos Aires Live Shows, one of Argentina’s largest rental firms, was the local provider for sound and lighting.

The Estadio Velez is a forty five thousand capacity Sports stadium, now firmly established as a leading venue for global events and tours. The d&b GSL sits as the defining apex of the d&b line array family delivering power and performance innovations that position it well above the iconic d&b J Series.

When the audio crew for Green Day arrived at the stadium, led by Kevin Lemoine, the band’s long standing FOH Engineer, and Clark Thomas, System Tech, they were full of anticipation. As long term users of the J-Series and declared d&b fans, the crew were very much looking forward to using GSL. The team were not disappointed.

“This is the best expression of live mixing I have ever encountered,” Kevin commented. “Now I want to try different microphones on sources because I can actually hear the nuances of them: different compressors, different pre-amps, and different EQs. This is a thrilling idea really, and the thought of using the GSL on a daily basis cannot happen fast enough. From someone that is familiar with every major PA system, it’s nice to know what is really the best, and I can’t wait to hear it again.”

The main system for the Estadio Velez show featured the latest addition to the d&b line array family, the GSL System – a new big brother for the iconic J-Series. The GSL8 and GSL12 line array modules are unique in their directivity control, which is seamlessly maintained over the full bandwidth, from 45 Hz to above 18 kHz. This is coupled with unprecedented low frequency headroom and exceptional resolution in the mid and high frequencies. Complimented by the SL-SUB and SL-GSUB cardioid subwoofers, the GSL System is a complete package designed to make full use of the tools in the established d&b Workflow.

For the 49,540 people capacity Estadio Velez, the system used fourteen GSL8s and two GSL12s per side as the main arrays, with sixteen J8s as out fills, this was supported by eighteen GSL-SUBs and eight V7P front fills – all powered by D80 amplifiers using Array Processing.

After hearing the PA installed at the Estadio Velez, pre-gig the reaction from the BALS audio engineers was a mix of astonishment and disbelief, noting the evenness of coverage on the pitch, the lower tiers, and the tiers at the opposite end, as well as the absence of the low-end rumble behind the PA. And that was without subs. Macaio, the d&b distribution partner in Argentina, mentioned that it was the clearest sound they had ever heard in the stadium.

By today’s standards, Green Day is a straightforward line-up consisting of three front liners with a couple of guest musicians, amounting to only 22 channels at the FOH desk. What the band “lacks” in channel count, Kevin makes up in toys, because he works almost exclusively analogue and uses a choice collection of boutique outboard gear.