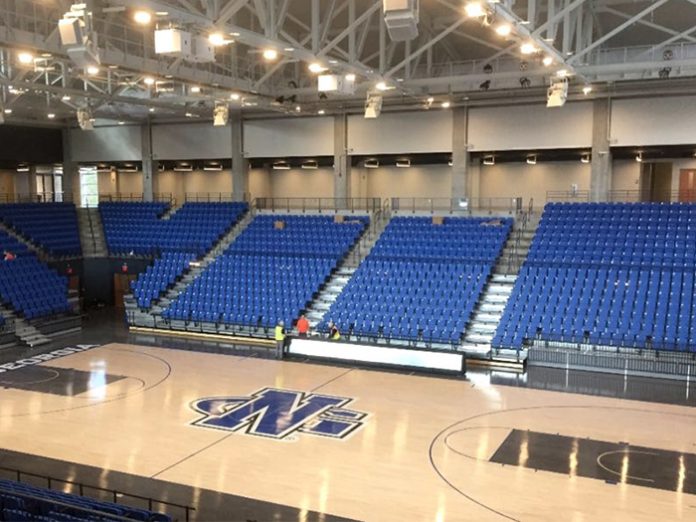 The University of North Georgia (UNG) recently built a 3,600-seat convocation. When it came to sound reinforcement, the University called upon Dallas-based Idibri who designed an Eastern Acoustic Works (EAW) system that would be suitable for the various ways the venue would be used.

“The convocation centre is a multi-purpose facility that hosts student and community activities and academics while also being home to UNG Nighthawk basketball games,” explained Ben Boeshans, consultant for Idibri. “The EAW QX 300 Series loudspeakers are superb for speech and music and offer exceptional control. The distributed system works extremely well in an arena setting.”

The seating area is covered by 14 clusters hung in a ring around the edge of the basketball court. Twelve of the two-box clusters are made up of a QX364 on top with a QX366 on the bottom with the last two clusters – hung on each side of the half court line – utilize a QX396 on the bottom and the same QX364 on top.

The convocation centre, which was fortunate enough to have a high amount of acoustic treatment on the ceiling and walls, still benefited from the broadband pattern control the QX300 Series offers, which kept sound on the seating and off the walls. Ben noted, “It would also be a terrific solution for hostile acoustical environments. The control and fidelity make the end result pleasing to even the most critical listeners.”

“This is now the largest multi-use facility in the area,” added Ben. “The space will be used for everything from graduation and basketball games to seating the floor for banquets, dances, job fairs and other community events. The new QX system works incredibly well for any event they may host. They are set for now and far into the future.”