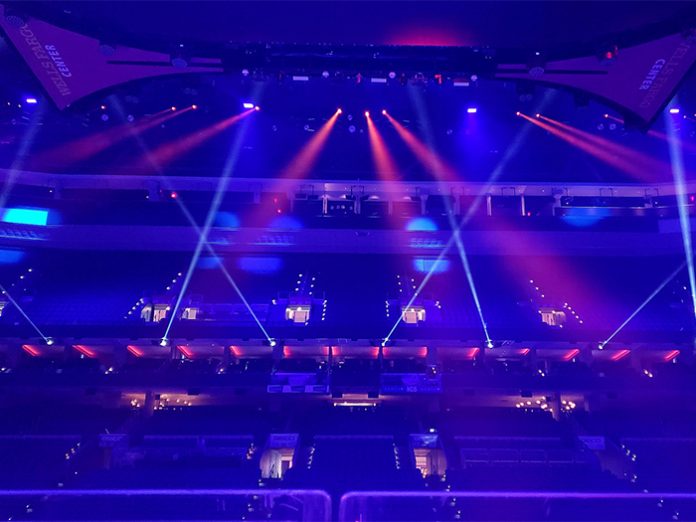 Last October, Wells Fargo Center in Philadelphia debuted a high-tech scoreboard and arena lighting system that has enriched the fan experience and set a new standard for arena scoreboard displays. Full-service production company Light Action Productions of Delaware played a leading role in specifying, designing and supplying the lighting and included a range of Elation lighting products in the system.

Philadelphia Flyers and 76ers fans know all about the massive configurable display that is described as the most technologically advanced arena scoreboard in the world. The world’s first 4K kinetic centre-hung entertainment system, the new scoreboard has become a huge part of the fan experience.

The new scoreboard is the latest step in Wells Fargo Center’s extensive renovation plan, a $250 million multi-year transformation of the arena that began in 2017. Completed in collaboration with Comcast Spectacor, TAIT Kinetix and ANC Sports, the scoreboard features the ability to expand and compress into a variety of formats during the course of a game, splashing the action across more than 6,600 square feet of 4mm LED video. Complementing the display are two large crown trusses designed to create a captivating experience with multi-directional movement and lighting effects.

Besides Flyers (NHL) and 76ers (NBA) games, Wells Fargo Center is home to the Philadelphia Wings of the National Lacrosse League, as well as college basketball’s Villanova Wildcats. The venue also hosts concerts and a number of other special events like motocross and monster truck rallies. “A scoreboard and complementary lighting package was needed to service all these different groups,” said Light Action’s Joshua Schulman, who was responsible for design of the new lighting system. “The Flyers and 76ers used to have their own individual lighting systems but with this new package there is now one system that works for all teams. The lighting system needed to be flexible but beyond that, with so much LED in the arena in the form of billboards and ribbons, brightness was key. The scoreboard itself is an enormous LED display so we needed fixtures that could fight through all that and still have power behind them.”

Another point Josh stressed from the very beginning as far as the design concept was the idea of layers of light. In the arena’s previous lighting system, which he also designed, all the lighting came from up top in the catwalk. “One of the things we wanted to do in this new design was create light from all different angles, sort of a modern dance concept with layers of light.” To realize the vison, he chose a package that includes Elation Artiste Monet, Smarty Hybrid, Protron Eclypse and Platinum Beam 5R Extreme luminaires.

Two 160-foot long trusses house 1000W discharge source moving heads along with 36 Elation Smarty Hybrid moving heads. “We wanted the Smarty to give us a hybrid that can operate in different functions,” Josh explained. “We like them because they give us the ability to wash the ice and audience or narrow down to a tight, punchy beam that can cut through all the other layers of light that we have in the arena. Those layers of light and the fact that the light comes at you from all these different angles and all these heights was one of the main concepts driving the design decisions.”

Also on the 160-foot trusses are pairs of Protron Eclypse multi-effect lights, eight fixtures back to back on each truss. “In addition to strobing, we use them for a color wash in the arena,” Josh said. “On the overhead catwalk are an additional 16 Eclypses pointing straight down and lighting the goal ends of the house. Between all the Eclypses, we can use them to colour paint the entire house seating and have written a couple of effects that move the colour around the arena. We use them as colour wash because they have so much power behind them. They’re able to make that really long throw and have enough punch that they can really add something, even when the rest of the room is lit up.”

Atop and underneath the two crown trusses – arching ribbons of LED tile that fly up, down and under the scoreboard itself – are mounted 12 of Elation’s award-winning Artiste Monet LED profile moving heads, six fixtures per ribbon. Schulman commented: “We really love them. They have a ton of punch and because they are an LED fixture, lamp hours is no longer an issue, which is fantastic. The Monet punches through all the other light, and that includes glare from flame cannons.” Graphics from the Monet’s two gobo wheels are used to ornament the floor below while the fixture’s 360-degree framing system allow for projections of dynamic shapes.

“Each team is particular to their branding and the Flyers are very sensitive to their colour of orange – Flyers Orange,” says Schulman, noting that he has worked with the Flyers for a number of years. “With the Monet’s colour mixing system, we were able to hone in on that particular shade. The 76ers are red, white and blue and obviously the Monets can do that well.”

Wells Fargo Center has two tiers of seating and over every level suite, under LED panels, are installed a Platinum Beam 5R Extreme moving head. “We like that fixture because it’s small and really punchy. We were able to tuck it up so it doesn’t create a visual obstruction to those sitting in the suite. When we turn all 41 of them on, because they are coming from an angle you don’t usually see, they can tip up and hit the catwalk or project all the way down to the ice. It creates a nice, multifaceted layer of light.”

Running 34 universes of control through Art-Net, Schulman says that 90% of the lighting system works on Elation eNode Art-Net to DMX routers. “Everything runs through a complicated infrastructure system but it’s been nice how quickly and easily it is to work with the eNodes and integrate the Art-Net system into the building system.”

Light Action often works with Elation rep firm The Healy Group to realize its projects and such was the case with the Wells Fargo Center install. “Working with Chris Healy is great,” said Josh. “He’s always on point and always willing to take a phone call at some god-awful hour!”

The new Wells Fargo Center scoreboard and lighting system have been a hit since the Flyers inaugurated it at their home opener on October 9th. Used to add an extra level of excitement to the pre-game hype, it serves as an important way to pump up both player and fan prior to a game. During the game, a series of effects are triggered during goals and timeouts and the system is an integral part of half-time entertainment and post-game activities.