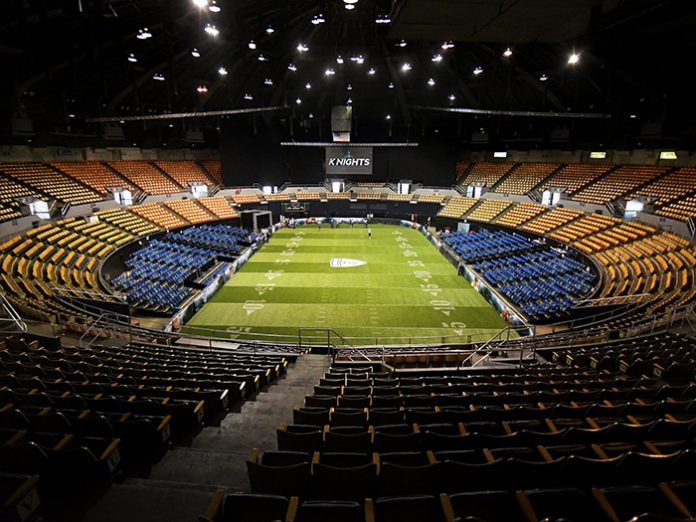 As part of the Los Angeles-based Legends Football League, the Nashville Knights are a 7-on-7, tackle football team that incorporated into the league in 2018. Playing their inaugural season in the Nashville Municipal Auditorium, the Knights wanted to offer an in-game experience that would create a lasting connection with their fans. Needing to supplement the production gear inside the multi-purpose event venue, the Knights worked with Elite Multimedia Productions who oversaw a complete game-day audio, video and lighting design.

“We try to design our in-game experience to be similar to what they do in the NFL to heighten the experience for our fans and provide a deeper connection to the action on the field,” said Candice Leisengang, Operations Manager. “When we started looking for production companies, we really needed someone who had the ability to do live audio, camera’s and video screens, plus we needed to implement an instant replay system. The Elite Multimedia team, led by Harry Shaub, was absolutely incredible and they really helped us walk through all the possibilities.”

As with many sporting events, video is an extremely important aspect in connecting the fans with the game. Knowing they wanted to implement an HD video system of their own, they worked with Elite Multimedia Productions to develop the ideal design for maximum viewing exposure in the arena.

“Our initial concept for the video portion of the production design was to have the screens hanging above the field, almost like a hockey rink,” added ToniAnn Santana. “As we started working with Elite Multimedia Productions, we decided to place the screens in the end zone so that everyone in the arena would be able to see the high-definition 4K video. Harry really took the time to educate us on the technical side, and it looked great.”

With the LED video displays in place, the remaining elements of the production design still needed to be brought into the action. Needing cameras, lighting and audio as well for the live, game-day atmosphere, a full production rig was created to complete and enhance the fiery environment inside the arena.

“When it came to the camera system, we needed the video to be able to work with the league cameras used for their broadcast, and also provide additional feeds for our live camera shot and the video playback for the instant replay,” explained Candice. “Additionally, the Nashville Municipal Auditorium has a pretty standard audio system, so we had to bring in supplemental gear to give us the sound quality we were looking for and provide PA for a live announcer. Since they didn’t have much for lighting either, outside of a few spotlights, Elite Multimedia Productions really brought in everything.”

In any live production environment, the preparation behind the event is often a key component to its success. With limited time to get each home game experience up and running, the Knights relied on the preparation of the team at Elite Multimedia Productions.

“As we needed to load-in all the equipment for each home game, this is where the value of our relationship with the team at Elite Multimedia really came into play,” admitted ToniAnn. “We typically load-in the day before the game and Harry was our go-to person from start-to-finish and it was seamless. We basically told him what our vision was, and then he worked with everyone on our team and with the league to make sure we were all getting what we needed for content and the fans.”

Now in place, the expanded production design for the inaugural season of the Nashville Knights was ready to light up the Nashville Municipal Auditorium. In this new, high-energy and fast-paced environment, the fans excitedly responded to creating both the experience and connection that the team desired.

“My favourite new aspect of the design was that we were able to go live, behind-the-scenes at halftime, and it was so intriguing for the fans to be able to see the coaches speaking to their teams,” added ToniAnn. “It really provided a deeper connection that gave our fans an inside look into how we are dedicated to playing the game of football.”

“The best thing about working with the team at Elite Multimedia Productions is that they stand behind you the whole way,” concluded Candice. “They were able to work within our budget while providing a high-quality production environment, and their knowledge and efficiency makes everything absolutely seamless. With all of the video, lighting and audio equipment they brought in, the experience of working with them was incredible.”