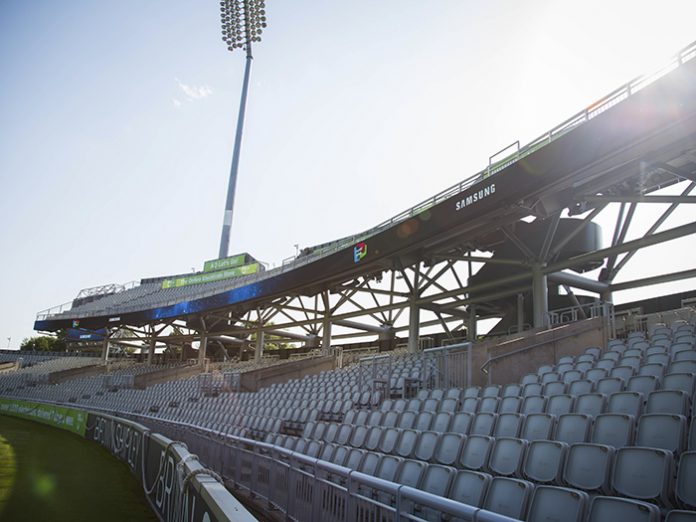 Lancashire Cricket, one of the leading 18 First-Class counties within the domestic structure of England and Wales, was formed in 1864 and is based at the award-winning 23,500 capacity Emirates Old Trafford, England’s second oldest Test venue.

The club has made significant investment to redevelop the stadium and become industry leaders, since losing Test status in 2009. Over the last decade, the club has undergone a £60 million transformation, making it one of the most desirable international and domestic cricket, conference and events venues in the north west.

There’s little denying that cricket has been the sport of the summer this year. Despite a reputation of being slow pace and attracting a generally older audience, this ceases to be the case.  Whilst the play of new, faster T20 and 100 ball games, have drawn in a younger crowd, the excitement of both the recent Cricket World Cup win and Ashes Test Match have had an undoubted influence on the sport’s renewed popularity. As hosts of the ICC Cricket World Cup, Lancashire Cricket needed to maximise the viewing experience for fans, and with information and stats vital to the game, their displays had to be second to none in time for the match. The club’s existing screens and technology were out of date, so new LED infrastructure was the latest stage in the redevelopment.

As part of the redevelopment, Lancashire Cricket partnered with Samsung to provide the club with a new, integrated video display system, which pioneered the digital experience for fans and set the benchmark for other UK cricket stadia.

Justin Hopwood, Sales and Marketing Director at Lancashire Cricket said: “Over the past ten years we’ve invested £60m in re-developing the stadium. We already had some large screens in place, but they were old and technology wise out of date.”

Integration, information and revenue were key for the new solution, as it needed be fully integrated with connectivity, capability and scalability. Clear display of information related to the game was of integral importance, to enhance match-day experience and engage fans around the ground.

Justin continued: “When we looked at the longer term, we knew the giant screen and LED ribbon was going to benefit to a match day experience. The challenge with live sport is to make sure that the experience is matched with what people expect from watching it at home.”

In addition to enhanced experience, the club also wanted to look at ways technology could increase revenue and the role it would play in sustaining the stadium’s long term business plan, not only by attracting more visitors, but also through sponsorship, advertising and implementation of the club’s own marketing strategies.

The system needed to have total connectivity, so as to develop fan engagement through web applications and mobile phones and as part of this, the club also invested in a £750,000 stadium wide wi-fi project.

The project needed to fit within budget and the screens installed ahead of the first ICC Cricket World Cup fixture, the biggest in global sport, India vs Pakistan, on 16 June. This level of digitalisation was also new to the club, so they needed to understand how best to make it work for them have it easy and manageable to use.

As experts in stadium LED, Pioneer Group were chosen for best understanding the needs of the project and, therefore, developing the most appropriate solution. Software was key to the infrastructure of the mid-tier and two jumbo screens – the system needed to be fully integrated and have the ability to support all assets.

Justin explained the importance of effective digital signage within a stadium environment: “The challenge with live sport is to make sure that the experience is commensurate with what people expect from being at home.”

Clear display of relevant information is therefore key. This is especially true for cricket, where facts and figures are integral to the understanding of the game.

On the previous display solution, Justin added: “We already had some large screens in place, but they were old, tired and out of date technology-wise.”

After reviewing options, investment in new jumbo and mid-tier LED was decided as the most effective solution to enhance viewing experience for fans. Justin continued: “When we looked at the longer term, we knew that the giant screens and LED ribbon were going to bring value and benefit to match day experience.”

To increase fan engagement, Pioneer integrated the latest ultra-high bright LED technology from Samsung for high definition visibility, even in direct sunlight. The latest ultra-high bright LED technology from Samsung was used to build the screens. This included 16 mm pixel pitch LED configured into 10×7 cabinet arrangements, to create two 60 sq metre jumbo displays located in the vicinity of the point and tram areas of the ground. Pioneer’s engineers utilised Samsung LED technology to design and manufacture a bespoke interface frame for the cabinets, working within the stadium’s existing infrastructure. For the mid-tier, Pioneer designed and manufactured custom brackets to interface each of the two Samsung Prysm View 16mm pitch LED screens to stands B and C.  A universal rail system was also built, so as to aid speed of install of both 56 x 0.956m screens to the existing stands.

However, hardware was not the only instrumental factor contributing to the display, as Justin highlighted: “The other thing that is equally important to the infrastructure of the screens and the ribbon is software.”

Paul Childerhouse, Managing Director at Pioneer Group, explained further: “The message from Lancashire was that they wanted a fully integrated system.”

After taking inspiration from the US, ChyronHego’s Click Effects was specified for its ability to quickly and easily display content.

Content is generated via a HX Server (Blaze), which runs the underlying graphics to both Jumbos and mid-tier, as well as controlling and creating show content. To safeguard the system, and to avoid the risk of failure on match-day, Pioneer built an exact replica in mirror display for backup. An 8×8 Matrix Switcher is central to the system, transporting all the video images that are to be layered and making them available to view/preview, which are all routed to outputs independently. Outputs 1, 2, 3 4 and are responsible for delivering background graphics, score-boards and advertising to both Jumbos and Mid-Tier ribbons. Outputs 6 and 7 are interchangeable inputs to the jumbos, allowing for the screens to switch to video via any IPTV STB box, digital signage platform, pc or even DVD. Output 8 is routed to the control room and can be used as a confidence or preview monitor for any of the inputs available to the system. To combine the output from the Click Effects servers with the video content of choice, Analog way scalers prepare the graphics so they are joined.

Paul added: “At a press of a button, we can play a particular showreel, a particular competition, and it’s very fast and in real-time.”

Olivier Cohen, Head of Commercial Strategy at ChryonHego, explains why ClickEffects was the perfect choice for Emirates Old Trafford: “The brief was to provide a more immersive experience to the audience, while, at the same time, providing a cost-effective solution that could be up and running within minutes – combined with minimal operational experience, full redundancy and, thus, providing an incredibly intuitive solution incredibly intuitive by any user.

“The nature of Click Effects Prime itself allows a huge amount of flexibility and ease of use in terms of providing real time 3D graphics or clips to any number of outputs, in any resolution to any canvas size, while being able to data bind to the visual displays. It is extremely easy to create moments of exclusivity in the arena through creating visual events by the click of one button. In short, the investment allows Emirates Old Trafford to scale up the fan experience within the stadium as and when adoption becomes a reality.”

“One of the most significant factors that came out of the American model was that their investment in screen and ribbon infrastructure delivered not only a better fan experience with engaging graphics, but also supports the stats that are integral to understanding the sport,” Justin explained. “Pioneer have continued to support us as we start to learn how to best use the software.”

The Samsung LED is the perfect match to support the vast potentiality for content, offering the ultimate in high definition display, even in direct sunlight. Cricket fans can now enjoy the game in the most informative and engaging way, as well as audiences from other events hosted by the stadium – such as music concerts – benefitting from a better experience.

Justin concluded: “We’ve been extremely pleased with our choice of software and hardware that we have put in place, and this will only benefit the club further over the next few years, where we welcome back another exciting set of international fixtures.”

Emirates Old Trafford has been digitally transformed and now boasts one of the most advanced LED infrastructures within a UK stadium, as well as being the first cricket ground in the UK with a LED mid-tier. With Pioneer Engineers commencing work at the end of March, the whole project was delivered by the beginning of May in time for the ICC Cricket World Cup.

Paul is proud of all the contributing elements which made the project a success: “If people were to ask me what’s really special about the project, it’s that we had Lancashire Cricket on one side and Pioneer Group on the other and we’ve all joined in our common goal to provide the latest technology to a cricket ground. It’s resulted in the latest LED technology from Samsung, the first mid-tier LED to be installed in a UK cricket ground, a control system from America which has never been tried in the UK before and we’ve brought these three elements together to make it a massive success.”