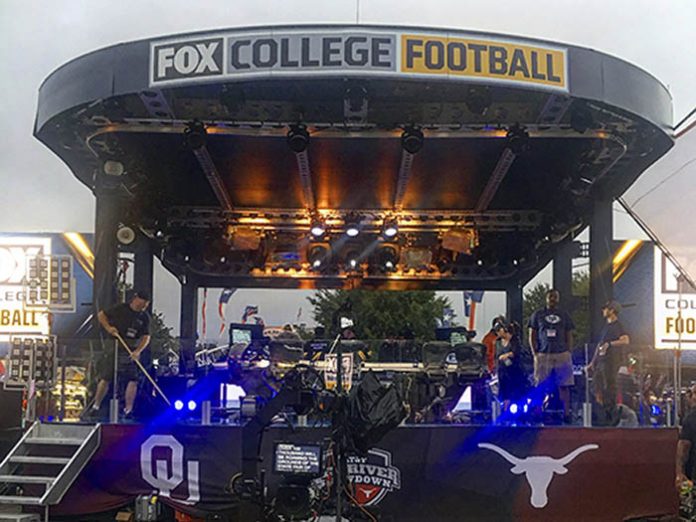 Soundtronics has been the RF vendor serving FOX Sports for several years, handling the NFL Sunday desk show when on the road, as well as championship games, Super Bowl LII and Veteran’s Day specials.

“FreeSpeak II is one of the primary reasons we have this agreement with FOX Sports,” said Jason Waufle, Partner, Soundtronics Wireless. “It is just so far ahead of the system they were previously using. You get reliability and quality with a large number of channels, and it just works.”

Soundtronics received a call three weeks before the game to join FOX Sports in Texas. “Three weeks is pretty standard, especially with our great relationship with FOX Sports. They know what we can do and how quickly we can turn projects around,” said Jason. “We used our comms plan for this year’s Veteran’s Day special as a template. Our knowledge and understanding of how FOX Sports does these shows is a big plus to be able to use a nearly identical package with some modifications.”

For the college football pre-game show, mics and IFBs were very important as producers wanted the show to be interactive, with talent and RF cameras moving as far as 35 yards away from the main set. That meant that communications needed to be as unobtrusive as possible for everyone.

The wide roaming capability of FreeSpeak II was invaluable to enable a flexible production. “We pushed our FreeSpeak II 1.9 GHz system to its maximum with 25 wireless belt-packs, supported by three transceiver splitters with five transceivers each, plus five more transceivers for a total of 20,” said Jason. “Plus, we used the fourth FreeSpeak II frame slot for an antenna card via fibre 300 yards away for a remote hit. Fibre is everywhere these days, and we are really grateful to FOX Sports utilities for running that line, as it would be pushing the limits of Cat 5 cable. Even the Dante cables to the truck were all fibre.”

The biggest challenge faced by Jason and all those using RF was the number of frequencies that would be used for the event, with both FOX Sports and ESPN, the stadium itself and a music stage all closely located. In total, over 400 RF frequencies were coordinated, including 200 that Jason and his crew would have to work around, plus their own kit and set-up.

“This was probably the best performing show I’ve ever done, and a lot of that is because of the Clear-Com equipment we were using,” said Jason. “It performed flawlessly, and that’s what you want for your clients — not one hiccup or a single complaint.

“Fair Park was a great environment to push FreeSpeak II to its limits, and we had no issues at all,” Jason added. “With wireless, there’s always the typical hurdles based on the size and scope of the event, especially with two competing pre-game shows and the game itself. But we had lots of really good professionals willing to cooperate to make sure that everyone’s frequencies were safe and that everyone had what they needed. It was a pretty sweet week.”

“It is absolutely satisfying to know that our customers can so easily depend upon and use Clear-Com equipment for whatever job comes their way,” said Simon Browne, Vice President, Product Management, Clear-Com. “The ability to have a set plan for one event and easily modify it for another shows the power and flexibility of Clear-Com equipment in the hands of its users.”