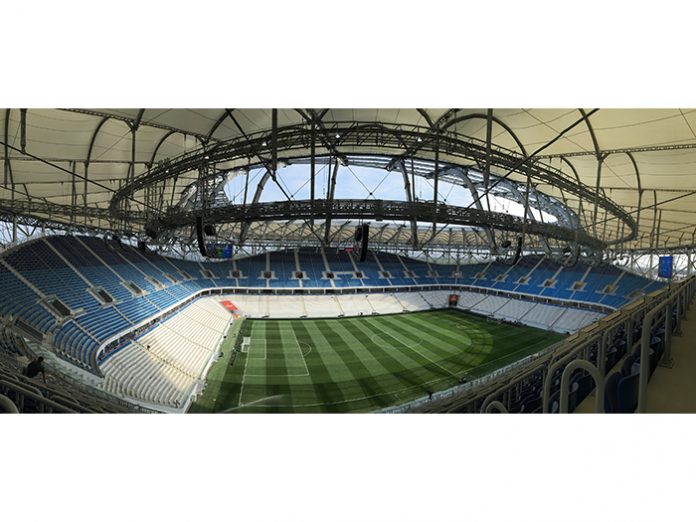 Funktion-One Russia has supplied and installed a permanent state of the art sound system for Volgograd Arena – one of the World Cup 2018 stadia. Working closely with the Funktion-One design team in the UK, the company specified a system that features 638 Funktion-One loudspeakers and 50 MC2 Audioamplifiers.

The project, which started life in spring 2017, demanded high-levels of support and commitment from both manufacturers, in order for Funktion-One Russia to meet all of the criteria and deadlines en route to delivering a world-class audio installation.

Funktion-One Sales Director, David Bruml comments: “We are extremely happy with the sound system installation at the Volgograd Arena and are grateful to our Russian partners for their unwavering support and excellent communication throughout. The whole company was energised by this major contract, which is amongst the largest Funktion-One installations to date.”

XTA’s Technical Brand Manager, Waring Hayes, added: “This was an amazing opportunity to showcase our latest DSP amplifier platform, and we were thrilled that Funktion-One chose to specify DSP amps exclusively for the entire system. The amplifiers come in DSP and non-DSP (but still with network audio) flavours, so the additional monitoring and control aspect was important in the choice of DSP models.”

The loudspeakers are accurately arrayed and aimed using bespoke metalwork – 24 C-shape clusters along the sides and 12 Y-shape clusters for the corners. Each array features Evo 6SH loudspeakers with 50-degree horizontal dispersion for the closer seats and Evo 7SH loudspeakers with narrower dispersion and resulting higher intensity for the further seats. Alternate clusters are supplemented with either two F215 Mk2 midbass or a single F221 enclosure. Under-balcony coverage is provided by Funktion-One’s highly intelligible and compact F81 and F101 loudspeakers.

Funktion-One Evo loudspeakers are renowned for their high output with efficiency and control.  Bruml said: “The Funktion-One Evolution system offers class-leading clarity and intelligibility for voice announcements, and the system delivers impressive and truly immersive full-range musical reproduction to enhance the match-day experience for fans.”

Amplification comes from 50 OEM Delta amplifiers from MC2 Audio. The amplifiers are all quad output, providing 200 channels of DSP and amplification, and a total power just short of 500kW.

Richard Fleming, Sales and Applications Manager, who was involved in drawing up the specification of the amps explained: “All the amps are connected via Ethernet and configured using our ‘AudioCore: Amped Edition’ software with our killer new feature – grouping architecture. This allowed channels to be logically grouped and sub-grouped to minimise the apparent complexity of the system, simplifying It from 200 channels down to just eight sets of grouped controls.”

Discussing the impact of the project, Bruml reflected: “Following largescale installations for the Winter Olympics in Sochi and for Krasnodar stadium, we’re honoured to have now supplied the loudspeaker system for the Volgograd Arena World Cup stadium, particularly in light of the historical significance of the city. Our designs are perfectly suited to the demands of world-class sporting applications and we look forward to furthering installations in similar venues in the future.

“John Newsham and I visited Volgograd in May 2018, ahead of the World Cup, to help finalise tuning. The system performed fully as modelled and predicted during the design phase. The sound feels perceptibly close to the audience, with an intimacy and accuracy rarely heard from stadia sound systems.”

Funktion-One Russia’s Andrey Kremenchugskiy commented: “The fully redundant Dante network and easy control of this huge system is second to none. It gives me the confidence to say that we have installed a system of the highest audio quality from these two prestigious British manufacturers. It sounds absolutely amazing and, long after the World Cup is over, I expect it to be thrilling sell-out 40,000 crowds!”