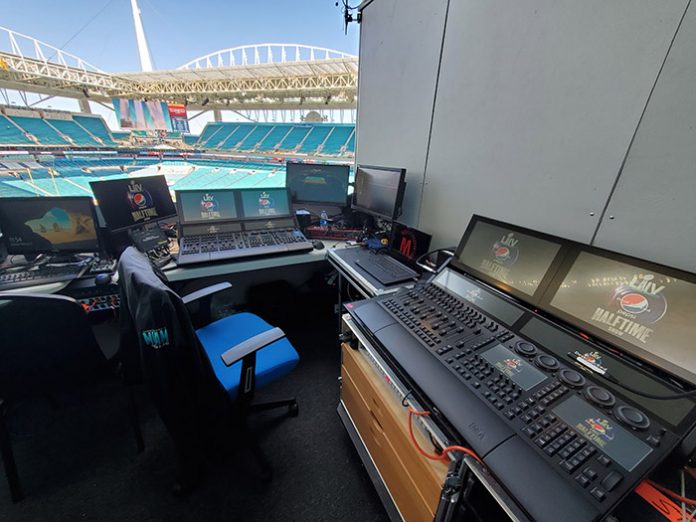 grandMA3 consoles made their Super Bowl Halftime Show debut at Miami’s Hard Rock Stadium where they joined a complement of grandMA2 boards to control video elements, stage effects and the LED wristbands worn by approximately 65,000 spectators. ACT Lighting, Inc. is the exclusive distributor of MA Lighting products in North America.

Super Bowl LIV featured one of the most talked about Pepsi Halftime Shows in years with Shakira and Jennifer Lopez turning up the heat with their high-energy, bilingual performances on the main stage.

Jason Rudolph, a Lighting Director for the halftime show for the last decade, was equipped with a pair of grandMA3 light systems and four medium NPUs to control all the video elements in the show as well as the LED lighting not from moving head fixtures.

“We pixelmapped the KNV LED cubes on Hippotizer Tierra servers and fed that via Art-Net to the grandMAs, where I merged it so that I could control the cubes either via the console programming or via content,” Jason explained. “The Hippos were controlled via MAnet, and we sent out sACN to the PRG series 400 for data distribution to the system.”

Eric Marchwinski of Earlybird Visual, LLC programmed PixMob on a grandMA2 in session with Jason so the latter could trigger the crowd’s LED wristbands during the show and conserve the tight space at FOH. Montreal-based crowd lighting company PixMob helped spectators feel like part of the show with illuminated wristbands synchronised to the super-charged music.

Production Designer Adam Biscow of Nashville’s Strictly FX, LLC used two grandMA2 lights to control all of the stage effects. Twenty-two cryo units were mounted around the main stage; fog and smoke effects were built into the main and satellite stages. They were fed via fibre from FOH to various positions on and around the field through PRG’s LX network.

“Of course, the grandMAs worked flawlessly,” Adam reported. “Strictly FX now uses MA consoles and products exclusively in our tours and one-off special events. We’ve been very happy with all of them and with the support from ACT Lighting.” Strictly FX recently took delivery of two grandMA3 compact consoles.

Jason noted that the halftime show “was my first full show running on grandMA3 hardware. I had no issues with the hardware at all. Overall, I had a great experience with them.”

In a can-you-top-this gesture, Jason followed the Super Bowl Halftime Show with the Academy Awards broadcast were he used grandMA3 full-size and light desks. “I used them to control the video systems there as well and had another nice experience with the consoles,” he said.