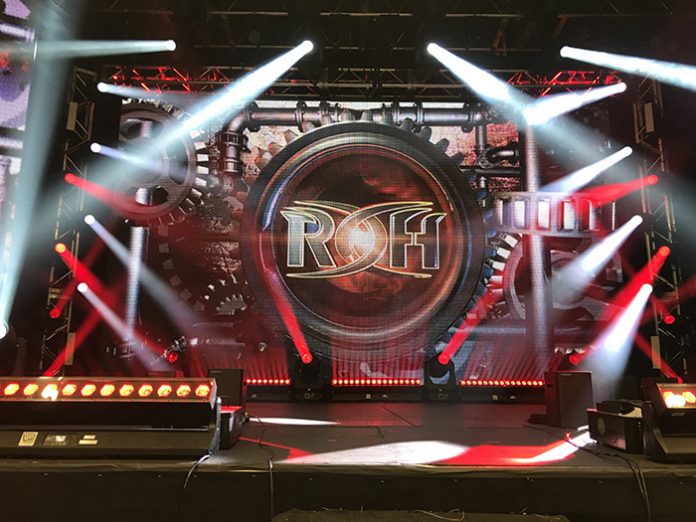 Ring of Honor (ROH) puts on a high-energy, electric live show and GVP uses the power and dynamism of an all-Elation Professional automated rig to help build excitement and support the drama.

ROH matches are intense affairs that are also filmed for TV, Internet Pay-Per-View or DVD release. An important step in building up the exciting atmosphere is the energy created from pre-match introductions as loyal fans anticipate seeing their favourite wrestler enter the arena.

GVPmedia has been working with ROH for the past 3 ½ years, providing lighting, LED video displays, and rigging for a growing list of Ring of Honor events across the U.S. For an ROH event in February at Center Stage theater in Atlanta, GVP turned to its inventory of Elation hybrid moving heads (Platinum HFX™ and Platinum FLX) to add adrenalin-inducing beams to the entrance stage where wrestlers make their electrifying appearance. The rig also included two luminaires that GVP added to their inventory after last year’s LDI show, the ZCL 360i single beam moving effect and one of Elation Professional’s newest colour-changing batten fixtures, the Chorus Line 16™.

“The role of the Chorus Lines in the ROH design was to apply a punch of colour as the wrestlers entered the arena,” said Gabby Schmees, Director of Business Operations at GVP. “We really liked the fact that you can tilt the Chorus Line fixtures and they can give off a nice linear beam of light. The fact that they zoomed was just another great feature.” Lighting design for the Atlanta ROH event was by GVP’s James Poole and Master Electrician was Kristen Conroy.

Useful as a stage wash or foot light solution, the Chorus Line 16 has full pixel control and enough power to compete with high-lumen lighting and bright LED video screens. It also includes motorized zoom optics and a 220° tilt motor function so designers can position the unit during a show. GVP has used their Chorus Line 16s on several projects across multiple markets the last six months such as corporate events, awards shows, concerts and television broadcast.

Chris Krumins, Senior Production Manager at GVP, has been impressed with both ROH and the value they are getting from their Elation lighting. He comments: “Ring of Honor has been a great company to work with. Mark Davis, the Director of Production for ROH, is always coming to us with new ideas and allowing us to choose the right fixture for the job. I would say that Elation has helped to improve the production value that GVP is providing for ROH and our other clients.”

GVP has stocked Elation lighting for years now and Krumins has seen a development in the company along the way. He adds, “Elation has come a long way and continues to impress us every day by providing great instruments that assist in making our shows look amazing. It is evident that every product continues to evolve. We are very happy to tell people that the majority of our lighting instruments are Elation.”