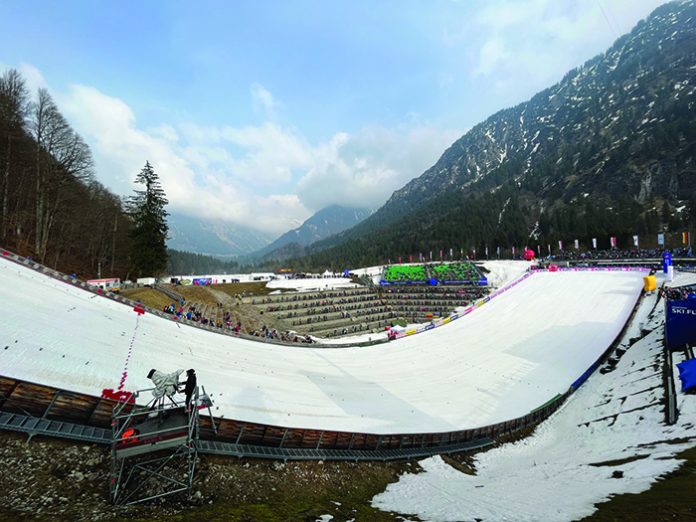 The FIS World Cup Ski Flying event in Oberstdorf is one of the most spectacular events in the annual competition calendar. Marking the end of the winter sports season, it features the world’s best ski jumpers doing battle in front of large crowds at the venue’s imposing Ski Stadium which can accommodate 27,000 spectators. This year’s renewal saw Domen Prevc of Slovenia set a new hill record of 242m. Audio is an essential component of the event in terms of announcements and commentary, as well as music reinforcement to ramp up the atmosphere. Sound production was entrusted to southern Bavaria-based specialists Harmonic Sound, who deployed CODA Audio systems to cover the arena in its entirety.

The principal area to be covered in the main ski arena demanded the best possible speech intelligibility, and spanned around 180 metres. Two smaller VIP stages also required coverage. On the face of it, this was a very challenging scenario but it was one that Harmonic Sound boss Christian Heckmair had no doubt his CODA Audio systems could overcome without stress:

“In actual fact, with a mixture of centralised and decentralised reinforcement, we managed to meet this very demanding brief with what some might think is a very small amount of equipment.”

The largest part of the production was covered by a flown combination of 12 of CODA’s flagship compact line array AiRAY units and 16 x SCV-F sensor controlled subwoofers. The two smaller settings saw the use of G712-Pro 3-way high power multi function units combined with HOPS5 2-way high power point sources. The systems were driven by CODA Audio LINUS14D amplification, which Heckmair is quick to praise:

“The LINUS systems amplifiers are characterised by great efficiency. That’s why just 7 LINUS14D amplifiers with DSP were enough for this event. Controlled with Dante and connected via fibre optics we theoretically had 90,000 watts available, which is quite something!”

As for the front of house, Heckmair, who has worked with almost every audio brand in the thirty years since he founded Harmonic Sound, could not be more enthusiastic about CODA’s ability to deliver to even the furthest areas of the imposing ski stadium:

“I am overwhelmed again. The speakers are smaller, much lighter and deliver more power than those of the competition – their qualities were obvious for all to see across the two days of this event. Sound imaging and speech intelligibility are A1 across the entire frequency spectrum.

“We received a great response from every quarter. When music was played it was punchy; when announcements were made you could hear every single word – no-one had to concentrate to hear the distances and scores of the competitors. In fact, someone told me you could still hear the stadium announcer perfectly well in a village four kilometres away!”

Harmonic Sound has grown to be one of the leading event services providers in southern Bavaria, and is responsible for supplying a wide range of prestigious occasions. Still as passionate as ever about producing great events, the company goes from strength to strength. Since it’s first CODA Audio investment in 2020, Harmonic Sound has added almost the full CODA product portfolio to its inventory, having decided to rely exclusively on audio equipment that Christian Heckmair describes succinctly as: “simply outstanding!”