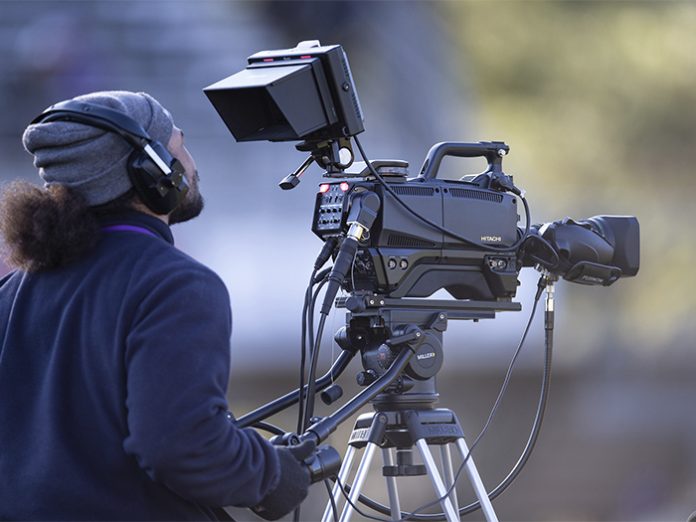 Spanning a 130-acre campus in historic Florence, Alabama, the University of North Alabama (UNA) – the state’s oldest public four-year university – hosts over 8,000 students and is home to the NCAA Division I North Alabama Lions. When the university’s Athletics department needed to upgrade and expand its video production capabilities in preparation for ESPN+ streaming broadcasts, it purchased four Z-HD5000 HDTV cameras from Hitachi Kokusai Electric America (Hitachi Kokusai) to meet its goals.

UNA’s 14 renowned collegiate athletic programs have collected more than 60 conference championships, dozens of number-one national rankings and seven national titles. After competing in NCAA Division II for over 40 years, the school accepted an invitation from the Atlantic Sun (ASUN) Conference to transition to Division I. With the move came the requirement for the school to begin broadcasting their games on ESPN+, which necessitated a significant overhaul of the Athletics department’s production operations.

“For our previous streaming initiative, the now-discontinued Lion Vision, we used just a single basic camera,” said Eddy Forsythe, athletics broadcast/video coordinator at UNA. “We needed to upgrade all of our production equipment, from the cameras to the switcher and graphics system to properly represent our Athletics program on EPSN+.”

The department commissioned the build of a mobile production trailer, which spends most of its time in the basketball and volleyball gymnasium – known as Flowers Hall – but moves to other venues as needed. For the cameras, Forsythe looked first to his successful past experiences with Hitachi Kokusai.

“I had used Hitachi cameras many times throughout my 33 years in the broadcast industry before coming to UNA,” he explained. “They were always very good products, and very durable. I knew I could count on Hitachi cameras whenever I needed them. I just fire a Hitachi camera up, and it works.”

UNA’s four Z-HD5000 cameras were first used on a November 2018 women’s volleyball game, and are now used to cover baseball, basketball, football, soccer, softball and volleyball matches. In addition to ESPN+ broadcasts, the cameras feed large video boards within Flowers Hall to drive fan engagement, as well as recording footage for highlight reels and melts that are sent to the ASUN conference office.

Forsythe praises the Z-HD5000s’ exceptional ease of use as valuable, particularly with his frequently changing crew of student volunteers. “Most of our volunteers are not in a related program, but just kids who want to learn the business,” he explained. “The learning curve on these cameras is next to nothing. I can take a new student volunteer, and within five to ten minutes I can turn them into a camera operator.”

Further aiding that ease are the cameras’ consistency and minimal maintenance requirements. “Once you sent them up, you don’t need to keep adjusting them; just turn them on, and they’re ready to go,” described Forsythe. “I don’t even remember the last time I had to adjust the white balance except when we move them between venues.”

The visual quality enabled by the Z-HD5000s has also lived up to Forsythe’s high expectations, while the cameras’ ability to adapt to varied lighting conditions has proven valuable for the university’s wide range of sports and venues. “We’re very pleased with the quality of our resulting productions – it’s second to none,” he said. “Of course, with cameras, the picture quality always comes back to lighting. For a daylight football game or in our LED-lit gym, the quality is just beautiful, and the Hitachi cameras handle low-light situations such as evening softball games much better than our previous cameras.”

Overall, the department’s equipment upgrade and new streaming outlet have elevated both their production results and the university’s public exposure. “Using the Hitachi cameras in our trailer has improved the quality of our productions, while broadcasting our games on ESPN+ has given us nationwide recognition,” summarized Forsythe. “We’ve always had a very good athletics program here at the University of North Alabama, but when we put our product out there on ESPN+, now we’ve got folks all across the country watching. That’s pretty sweet, and the Hitachi cameras are a key part of it.”