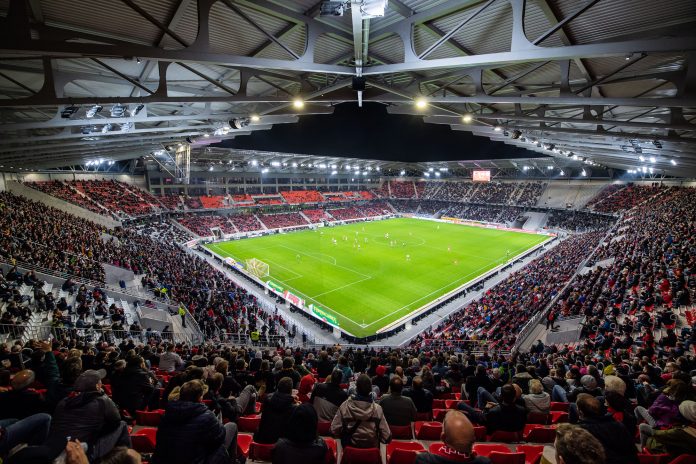 The Europa-Park Stadium, designed by HPP Architects for its client Stadion Freiburg Objektträger GmbH & Co. (SFG), was created as the home venue of SC Freiburg. Work on the site, with an area of approx. 44,300 m², has been in full swing since 2018 – now the completed stadium has been filled with life for the first time. The venue was officially opened on 7 October 2021 with an opening ceremony followed by a friendly game against FC St. Pauli. On 16 October, the atmosphere in the stadium will reach fever pitch for the first time in a Bundesliga game against RB Leipzig.

“The new SC stadium is a wonderful fit for Freiburg and it suits the club perfectly. It is not only functional, but also convincing in terms of urban design and architecture. The stadium sits naturally between ‘Wolfsbuck’, the airfield and the university where it is easily recognizable. It will be another centre of identification for the SC fans, and also for all citizens of Freiburg”, summarises Freiburg’s mayor responsible for the building authority, Prof. Dr. Martin Haag. SC Freiburg took the decision to create a new stadium some years ago in order to remain competitive over the long term and further establish itself in the Bundesliga. In a consultation process in 2017 the general contractor Köster GmbH and HPP Architekten GmbH won the commission for realisation and planning of the new stadium.

The coherent and timeless elegance of the finished construction ensures that it blends seamlessly into the gentle topography of the Wolfswinkel in the west of Freiburg. Due to its proximity to the airport and the associated height limitation, the stadium is designed with flat orthogonal roof geometry, whilst external diagonal tension rods lend an unmistakable character. In response to the basic octagonal shape of the stadium’s interior, the main access points are situated at the corners, creating a dynamic effect and sense of identity. The architecture focuses on the essentials: clear structure, functionality and cost-effectiveness, but also above all on sensory experience with an abundance of openness and transparency. The Freiburg stadium unites a wide range of sports and non-sports event areas under one roof. The business, conference and event areas are designed in such a way that they can be operated independently during and outside the football matches. Sustainability was also given due consideration in the retrofitting of the whole roof with 15,000 m² photovoltaic panels. “The slightly raised aspect on an elevation suggests the motif of a place of pilgrimage – the stadium becomes an eye-catcher and attraction,” explained HPP Senior Partner, Antonino Vultaggio.

Apart from using a clear architectural language, a shared experience for the fans was focused right from the start. A viewing gap between the upper and lower tiers makes it possible for fans to experience the interior of the stadium as soon as they enter. Through this permanent reference to the playing field, the surrounding promenade becomes a place for the public to linger and engage with one another – before, after and during the game. The promenade offers everyone – whether walking or sitting in a wheelchair – an equal stadium experience. Also the grandstands are arranged in such a way that the spectators can enjoy a perfect view of the pitch from any direction and immerse themselves in the roiling atmosphere. In the south, the promenade principle gives way to the fan wall: “Here, a continuous tier from the base all the way up to the roof provides space for up to 8.700 standing spectators to celebrate and perform their tifos,” said Antonino.