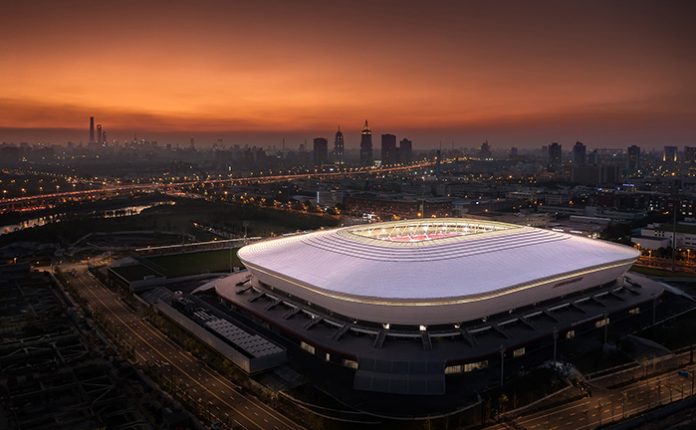 The 33,765-seat SAIC Motor Pudong Arena is the new home ground of professional football association Shanghai Port FC and is the first football stadium in China to meet the international standards of world football association FIFA. HPP won the internationally tendered competition in 2017 and was commissioned with the lead consulting, design, interior and landscape architecture. The visionary overall concept of the SAIC Motor Pudong Arena was already chosen for the prestigious “Iconic Awards 2021 Innovative Architecture Selection”.

The new stadium stands in the outer green belt of Shanghai on a 10-hectare site. Its wide range of services with two adjoined training pitches and offers for the general public secure the complex its place as a national sports centre. The new landmark SAIC Motor Pudong Arena provides space for identification and fan culture and is becoming an urban meeting point for the Shanghai population with an array of fitness, leisure and entertainment activities.

A well-designed stadium not only provides the ideal backdrop for matches on pitch, but also serves as a catalyst for excitement in the stands. The basis for an atmospheric fan experience is the compact shape of the stadium. The cantilevering of the upper tiers ensures the best view of the pitch right up to the uppermost places and achieves maximum proximity to the pitch. This allows development of the highly coveted “cauldron effect”, which is palpable in every seat. The division of the tiers into upper and lower sections also enables the flow of spectators to be efficiently managed and distributed over the promenade which runs right around the inside of the stadium. “The architecture of the new Pudong Soccer Arena reflects the identity of the club with its healthy, nurturing fan culture and creates a unique football experience”, says HPP Partner Jens Kump.

HPP designed the shape of the stadium to resemble a bowl made of traditional Chinese porcelain. The compact impression of the flat geometry is underlined by the planar, white shimmering metal façade and curved building envelope. It is this minimalistic architectural language that allows the stadium to blend unobtrusively into its simultaneously urban and rural surroundings and skilfully shift the focus to use and interaction.

The supporting framework and the roof with its predominantly horizontal aspect and simple, clearly defined contours also support the “less is more” concept. In a similar way to the spokes of a wheel, the stadium’s flat roof functions as an internal tension ring and external compression ring, following the principles of suspension cable construction. Unlike traditional structures, this innovative design technique enables creation of an interior space without vertical supports spanning 56 metres from roof edge to central opening and is used for the first time anywhere in the world in the SAIC Motor Pudong Arena. The maximum span of the roof measures 212 metres. The supporting framework of the spectator stands simultaneously supports the substructure of the outer envelope. Podium, spectator stands and façade merge to form a single entity.

The impact of the arena will not only be as the home ground of the Shanghai Port FC, but also as the main venue for the Asian Cup 2023.