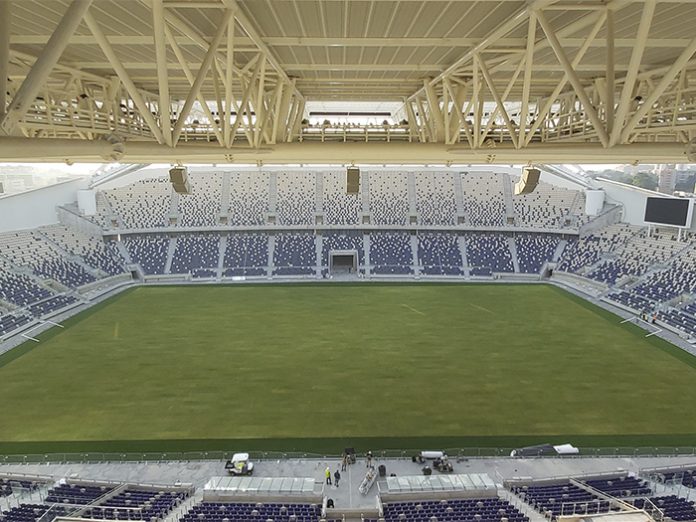 Bloomfield stadium, home of Hapoel Tel Aviv, Maccabi Tel Aviv and Bnei Yehuda Tel Aviv football clubs, first opened in 1962. In addition to hosting three football clubs, the veteran stadium has accommodated world-renown musical acts including Celine Dion, Rihanna, and Pixies. In 2016, the stadium was closed for a massive three-year renovation, which included expanding the capacity to 29,150 seats, making it the third-largest football stadium in Israel. Barkai LTD was brought in to outfit the newly renovated stadium with a sound system that would be loud enough for football matches, had clear and responsive sonic quality for concerts, and could withstand extreme weather conditions.

“The main challenge of this project was to give appropriate sound coverage to the southern and northern balconies that are not roofed,” said independent consultant Harel Tabibi, who specified and designed the new sound system. “As a result, we had to install the speakers over the sides of the balcony, 80 meters away from the audience. The main advantage of working with JBL was having such a wide range of products to choose from. Combining the PD-6000 series and PD-500 series loudspeakers created a quality result and gave equal and uniform coverage throughout the stadium.”

The system installed by The Charmer Group includes 80 JBL PD564 WRC loudspeakers, which have a high output capability, excellent pattern control and are ideal for music and speech systems. The stadium was also equipped with 12 PD6322 WRC loudspeakers, which were chosen for their high output sensitivity and extended low-frequency response. The speakers were powered by 16 of Crown’s flagship I-TECH 4X3500-HD power amps, selected for their ability to deliver uncompromising power output across four channels.

“The angles were spot on—after the installation process took place and testing began there was no need for any adjustments with the hang points. It was a challenging project, as there were no cranes allowed on-site after the installation of the soccer pitch, so the very detailed plans we got from HARMAN helped a great deal.”

“It was an exciting experience to support such a complicated project,” said Chen Nevo, KZPRO. “The support we got from HARMAN was very productive and helpful.”