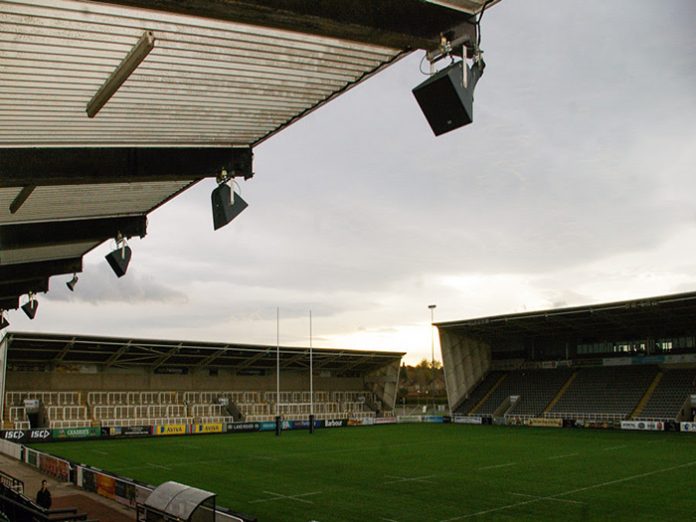 Set in the north east of England, Kingston Park Stadium recently underwent a complete upgrade of its main sound system, transforming the match day experience for visitors. Although billed as a multipurpose stadium, its main focus is rugby, and the 10,200 capacity facility is the home ground for both Aviva Premiership Rugby Union side Newcastle Falcons, and League side Newcastle Thunder.

A complete new RCF Acustica P-series weatherproof, purpose-designed stadium system has replaced an ageing PA that was not IP-rated, and no longer fit for purpose, as the North, South and West stands were systematically developed. Part of a complete RCF solution, the equipment was supplied Ed Gamble at local RCF partner Nitelites, who also assisted with the design, with installation carried out by the R&B Group under the project management of Steve Brown.

AV specialists R&B Group were already well known to the Stadium as they had staged numerous corporate events there in the past. “They recognised the need for a new system and approached a number of companies including us,” said Steve. “We built the relationship during a tender and design process which started last September.”

He recalls, “The system needed to work with the existing big screen, and it needed to provide longevity and operate alongside the emergency system already in place. There were also issues of containment to address as the stadium is surrounded by residential buildings.” The Bowl system would be fed by two handheld mics, two background music sources and VT. And so in view of the large music content requirement — and the fact they have limited spill —, Ed Gamble recommended the 15” P3115T as the ideal solution.

“We chose P series because of the dispersion pattern, the bandwidth capability for music and the IP55 weatherproof rating,” Steve confirmed. “In addition, they have a proven track record in stadiums and fitted the budget.”

All the P series enclosures are spaced equidistant via the existing fixing points utilising the stainless steel brackets R&B Group provided an end-to-end signal chain using a Yamaha processing and distribution matrix over fibre via the Dante protocol. This has ensured that a pristine, low-latency signal is maintained over long distances from three control rooms (situated in South, West and East stands) — linked by Gigabit switching on a redundant network, with UPS sitting on the network switches in the West stand and at FOH.

The Corporate boxes in the West stand are also serviced by RCF loudspeakers, with 13 compact DM61 speakers each serving two boxes. These were driven 100V line by three RCF UP 2321 amplifiers 320W power amps. R&B Group’s install team consisted of Chris Tolley, Phil Marshall and Dan Johnson. Following commissioning, the company spent a day testing the system, loading down EQ presets and providing operator training. The team has monitored the new system and sound levels during a number of the games this season and will continue to work with the club on further developments.

Summing up, Steve said: “We received great technical support from both the stadium’s onsite technical team and Nitelites — in fact one of the reasons we opted for RCF was the assurance of after sales service and the fact that the brand has a great heritage in stadiums.” Newcastle Falcons representative, Angela Alderson, added her own testimonial. “Earlier this year we invested in a tailor-made PA system at our home ground at Kingston Park Stadium. Throughout the design, installation and fine-tuning process we found R&B Group to be extremely professional, with meticulous planning and dedicated to providing outstanding service. “Some of the comments back from our supporters include ‘premium sound quality’ and ‘excellent to see continued investment in the facilities’”.