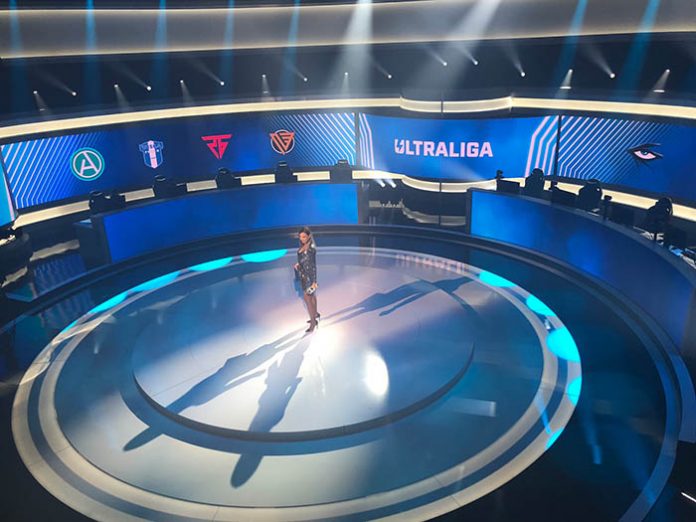 Polish design and installation company ARAM has outfitted a new Esports studio in Poland with a flexible, state-of-the-art Elation lighting system. The studio, at Polsat television in Warsaw, is equipped with the latest in studio-optimised LED luminaires designed to provide players and viewers with the best Esports experience, whether watching the event on TV, online or in person.

As one of the few technical production companies specialised in Esports, ARAM has stood behind the design and technical production of some of the largest Esports shows in the world, experience that has given them unique insight into how an Esports project should be tailored and delivered. “Esports is an industry with a particular set of needs and requires different show formatting,” stated ARAM co-owner Rafał Mrzygłocki. “Although the type of lighting required is generally the same as any other television studio – generally high quality white light – player lighting was also a factor to consider, meaning we had to be careful not to obstruct the players’ vision or interfere with their communication. As for the audience, they must be able to enjoy the action inside the game.”

The Polsat studio was completed in July as the first broadcast-owned esports studio in the country. The flexible space allows for different configurations, for example news desks can move in and out so the studio can be used according to needs. The alternating designs play to the Elation lighting system’s strength as the intelligent lights adjust accordingly. “Mostly the space is lit as a traditional studio but sometimes there are special looks like an opening cue for instance, when a match completes and at other times,” commented Rafal, who noted that another important requirement was for all the lighting to be LED based so as not to overheat the players.

“Elation has launched more interesting products over the past few years and we’ve also noticed they have been on more and more top productions,” continues Rafal, who added that he has used Elation on ESL One series Esports shows in the past and other projects. “The quality is excellent and the products are well designed. Overall, it is excellent value for money.”