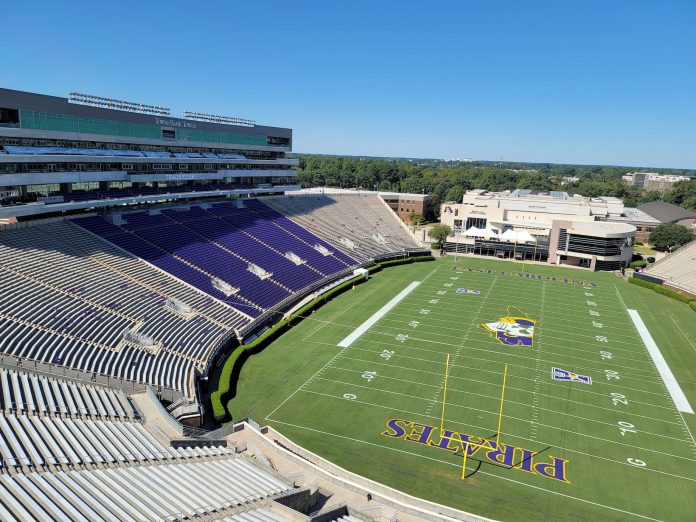 When East Carolina University stadium experienced  debilitating audio issues right in the middle of football season, they turned to PC Sound and LEA  Professional to rescue the season and restore the fan experience.

Dowdy–Ficklen Stadium is the on-campus football facility at East Carolina University for the East  Carolina Pirates in Greenville, North Carolina. The stadium has a capacity of 50,000, making it  the second largest college stadium in North Carolina.

James Braddy, Certified Technology Specialist (CTS) at PC Sound, a local specialist in pro audio,  video and lighting installations, got a call on a Monday in September from the Associate  Athletics Director at ECU, Greg Pierce. Pierce explained that the previous weekend’s home  game had been overshadowed by a series of audio issues.

“At the time, half the sound system didn’t sound like it was working,” said Greg. “I knew we  needed a solution and we needed it yesterday.”

On the weekend in question, stadium goers and players had complained that they couldn’t  hear, and the system would cut in and out. According to James, 60% of the stadium’s legacy amplifiers were off and the other ones were going into thermal protection mode.

While PC Sound tried to find a solution fast, they also knew the current supply chain could be  an issue.

“I have always been able to get amps from LEA Professional through their rep Mavric and they  are my go-to provider,” commented James. “We put the order in on a Tuesday at 7pm and  within four minutes I had a reply from Scott Robbins the VP of Sales, with different options. The  amplifiers were delivered to us on that Thursday and on Friday we did the install, ready for the  weekend’s games.”

For James, most of this was possible because of the simple set up feature on the Connect Series amplifiers.

“One of my favorite things about these amplifiers is just the speed of setup”, said James.  “Being able to push a button and connect to it with my phone or iPad tablet, without  downloading an app or registering an account is fantastic.”

“The new amps, combined with a new mixer we added, ensured the stadium sounded much  cleaner and clearer than it had ever sounded before, even though we were still dealing with  some blown speakers at the time,” continued James.

The following game sounded even better according to the team at PC Sound, and the stadium  was ready for homecoming the following week, which included a performance by a live band.

James continues to choose LEA amplifiers for all installs he conducts. “These amps have built in DSP processing and tons of flexibility with the ability to double the power on one channel  without having to compromise on losing a channel. Not only that, they look and sound great!”

In order to monitor the system, PC Sound utilises the LEA Professional Web UI. The Web App UI  is LEA Professional’s browser-based interface which allows local monitoring of every amplifier  connected to the network from any phone, tablet, or PC. In addition, it allows users to view the  status of every channel on any given amp. This alongside the remote control LEA Cloud platform, ensures the integrator is in full control of the system at all times.

PC Sound is considering adding this remote monitoring service as an additional feature to their service contracts. “That’s something that we are looking forward to starting soon.” said James.

Currently the system at ECU runs on analog connections, but the plan in the immediate future is to switch it over to a Dante audio network. This provides the stadium with another safety  feature, if the Dante network goes down for any reason, it will automatically switch to analog.

For Greg, the new system is exactly what they needed: “It was everything we needed  and some. I couldn’t have asked for better and we’re just so grateful to have a superior sound  system in the stadium for our players and fans alike.”