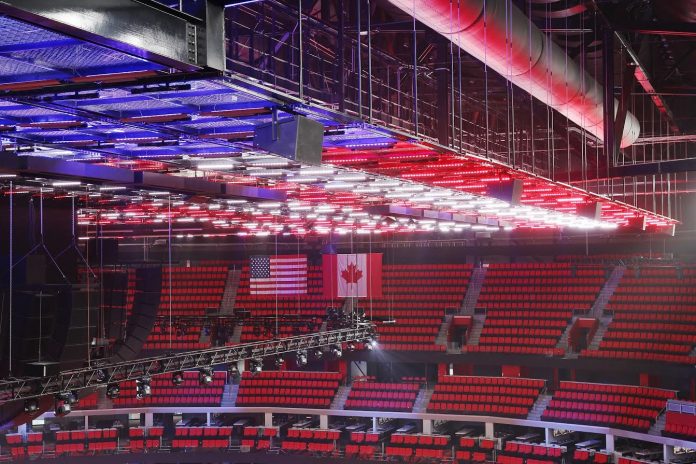 Little Caesars Arena in Detroit opened in September to praise as one of the most innovative and technologically impressive sports and entertainment complexes in the world. Part of the credit can be taken by the venue’s unique dynamic ceiling, a 43,000-square-foot wire grid onto which nearly 1,700 custom LED strip lights from Elation Professional are mounted.

Designed by architectural and engineering firm HOK architects, the 863 million dollar, 20,000-seat arena is part of District Detroit as the major new attraction in the city’s rapidly revitalizing greater downtown. Home to the Detroit Red Wings and Detroit Pistons, the arena will be home to a slew of sporting and entertainment events. Built to maximize the live event experience, it is one of the most unique arenas in the world.

Lighting and multi-media design firm, Illuminating Concepts (IC), was the lighting designer on the project, responsible for lighting the public spaces through to the theatrical lighting in the bowl. The dynamic ceiling is just one part of the arena’s large integrated lighting network in which all lighting is interconnected – indoors and out – to act as one themed environment. Illuminating Concept’s design for the arena uses lighting to create a space that engages, guides visitors, creates moods and disseminates advertiser information. IC brought in production design company Crossfade Design, a firm with extensive theatrical lighting and video experience, to handle the theatrical lighting elements, including the dynamic ceiling.

The client wanted the arena bowl to be covered by a solid ceiling, rather than the typical black void of most arenas, but with challenges like HVAC and rigging to contend with, not to mention cost concerns, the solution wasn’t easy to find. The answer came in the form of SkyDeck, a tension wire grid system created by InterAmerica Stage. The open wire covering acts as a scrim over the bowl, a modular ceiling that can be reconfigured for any event. Keith Irtenkauf of Illuminating Concepts calls it a “functional solution to an aesthetic problem and a solution that worked well.”

“When George Heinlein of HOK contacted me about the ceiling and his concepts for it and the possible use of SkyDeck, I immediately came up with an idea to light it and brought the artistic concept to IC,” says Wade of Crossfade Design, who was involved in the entire design process. “We told them, ‘If we can find a fixture to light it, we can do something really special.’” Although Wade and his team tested several strip lights for the project, they quickly came to the conclusion that a custom solution was best. “We looked at the Elation strip lights and after talking with John Dunn and Eric Loader at Elation, discussions were begun on how to modify their LED-based SixBar for the project.”

Only minimal features were required. The result was a custom spin-off of Elation’s six-color SixBar 500™ (1/2 meter) and SixBar 1000™ (1 meter) LED batten lights yet with RGBW LEDs only, a lower wattage and other design changes that allow it to keep a clean look. As an example, Irtenkauf mentions the SixBar’s connector locations for data and power, which had to be moved to the end of the fixture. “That was not a small issue to overcome,” he says. “Elation was really helpful in making the modifications happen, also in getting the fixtures produced in time and to site on time. The custom fixtures have worked out really well and also met the budget.”

The remodified fixtures use 10W Cree RGBW multi-chip LEDs with each LED individually controllable, which makes a virtually unlimited number of designs possible. Custom mounting brackets were added to install the fixtures beneath 372 removable SkyDeck panels (4 fixtures per panel). Each panel has four quadrants that can be lit separately and each fixture has a custom-made glare shield attached so that the lights won’t shine into the audience’s eyes as seating extends nearly up to the level of the ceiling.

The custom Elation fixtures, dubbed the Quad Bar 500 and Quad Bar 1000, create a multi-coloured light ceiling that immerses guests in a state-of-the-art house lighting system like no other. Using the ceiling’s wire mesh as a scrim, the lighting can be used to engage the visitor, create different moods and project logos, advertising and other branding. The dynamic ceiling allows everyone to feel a part of the fun and has also eliminated the typical arena black hole look above the audience.

Crossfade was also responsible for fixture addressing, all data and signal flow, including RDM, as well as initial programming of the lights. IC produced the design drawings and handled all of the coordination with InterAmerica Stage. Electrical contractor Motor City Electric installed the fixtures. Illuminating Concepts, Crossfade Design, InterAmerica Stage, Elation Professional, and Motor City Electric all collaborated on the project.

The first events at Little Caesars Arena took place in mid-September, a series of six sold-out shows with Detroit’s own Kid Rock. Kid Rock LD Richard “Nook” Schoenfeld took advantage of the opportunity the unique ceiling presented by complementing the show with patterns and chases to match the music. He even painted the ceiling to look like the American flag during a big emotional moment of the show.

“Adding a roof of colour to the new arena was one of the best thoughts anyone could ever have, as far as a lighting person goes,” Schoenfeld commented. “Hats off to Crossfade Design for this concept and Little Caesars for running with the idea. As designers, we are often trying to fill that black hole over everyone’s head with light and what better way to do it than have a ceiling of pixels? We had a ball just running chases and patterns through 20,000 DMX channels of the Elation LEDs and a grandMA. Programmer Jason Winfree set it up perfectly for us to come in and just start adding it to our show.” Wade worked closely with Schoenfeld to ensure that the new lighting ceiling was used to it fullest potential during the Kid Rock shows.