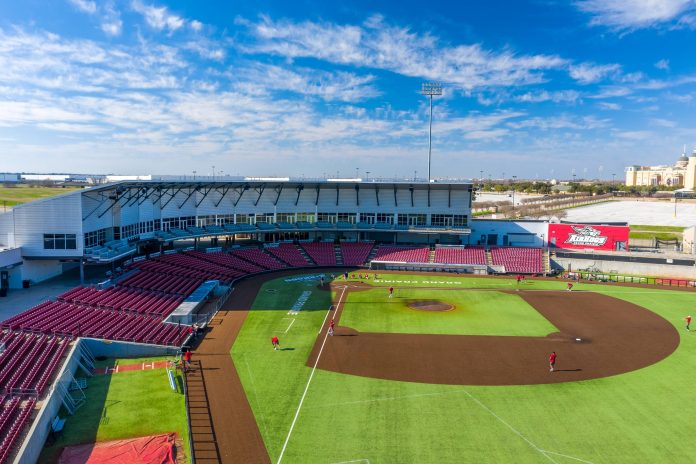 One of the best sports performance facilities in minor league baseball during its previous life as the home of the Texas AirHogs, the soon-to-be renamed stadium will now become a dedicated world-class cricketing facility. The redevelopment of the venue is scheduled to take place throughout 2021 before playing host to the Texas MLC franchise that is planned to launch in 2022, as well as a base for the USA Cricket National team and a premier High Performance Center.

“As the first Major League Cricket stadium in the United States, Grand Prairie represents a seminal moment for the sport in America, and we are incredibly excited to partner with the City of Grand Prairie to bring Major League Cricket to Dallas,” said Sameer Mehta and Vijay Srinivasan, co-founders of ACE and MLC. “Grand Prairie’s centralised location in the U.S. and the thriving Texas cricketing community, allied with the quality of the facility, made it the perfect site for us and we are certain that this is the beginning of a fruitful long-term partnership with the City that will bring much success.”

The City of Grand Prairie is an ideal location for a premier cricket stadium in Texas, with its strong cricket fan base and demographics in surrounding areas, favourable time zone for broadcast in major international cricket markets, and Dallas-Fort Worth’s pedigree for major sports teams and stadiums. The new cricket stadium will see the existing baseball diamond converted to an international size and quality cricket field capable of hosting major international competitions, a number of training nets and batting lanes added, as well as two additional outside turf fields that will be used for training and by the affiliated MLC academies. Upon completion, it will be the most extensive fully-dedicated cricket facility in the United States.

The venue will also be a centerpiece of USA Cricket’s efforts to bring major international events to the United States, including regional International Cricket Council (ICC) World Cup and T20 World Cup Qualifiers for Men and Women, Cricket World Cup League 2 series, and International Series against local rivals Canada and the West Indies, as well as other contemporary nations. The stadium will also be a featured aspect of USA Cricket’s efforts to bring the ICC T20 World Cup and other major events to the United States by 2031, in a process that is ongoing as part of a joint bid with Cricket West Indies.

“We are very excited about this opportunity to bring cricket to Texas by converting our minor league baseball stadium,” said Grand Prairie Mayor Ron Jensen. “Cricket is the second most popular sport in the world behind soccer, with a large and growing audience in the states. We look forward to an exciting future with our partners.”

The redeveloped stadium is slated to be ready for cricket in Spring 2022, but will serve as a key High Performance center for the USA Cricket Men’s and Women’s National Teams and other key youth and zonal cricket squads during the interim. The Men’s National Team is currently ranked 19th in the world, having gained One Day International status for the first time in 2019. The USA Women’s National Team will be attempting to qualify for the ICC Women’s World Cup for the first time next year, having advanced to the global qualifier in 2019.

“In association with our partners at ACE, we now have a world-class facility to develop our domestic talent and help us fulfill the goals we announced in our Foundational Plan,” said Paraag Marathe, USA Cricket Chairman. “The successful development of a cricket-dedicated stadium has long been a priority for us, and it is a significant stride forward for the growth of cricket in America. We also look forward to bringing international cricket events, and the crowds that go with them, to our new stadium, and to help introduce the sport to a broader audience.”

USA Cricket has recently undergone a significant transformation that includes the release of the organisation’s first Foundational Plan with a vision to establish cricket as a leading sport in the USA and become a full member of the International Cricket Council by 2030. Cricket is the world’s second-most popular sport in terms of global viewership, attracting billions of viewers worldwide with a significant, growing American fanbase. USA Cricket counts more than 150,000 regular players across the country, with roughly 20 million fans and more than 4 million regular viewers of cricket.

Honored by Baseball Digest as the Best New Ballpark in 2008 following its inaugural season, AirHogs Stadium served as the home of the Texas AirHogs of the American Association of Independent Professional Baseball for 12 years. The stadium, located conveniently between Arlington and Dallas, is adjacent to Lone Star Park horse racing track and The Theater at Grand Prairie, currently seats a capacity of 5,445 and features 13 luxury suites and ample space for improved amenities to enhance the experience of fans and cricketers alike. The stadium will be repurposed to be completely dedicated for cricket, with an increase in the seating capacity planned to accommodate more than 8,000 spectators with additional and upgraded hospitality features.

Along with the changing demographics of the Dallas region that have made the area a prime location for the grassroots development of cricket, the sport has seen recent progress domestically at the professional level. Following a player draft in August this year, Minor League Cricket (MiLC) successfully staged a series of exhibition matches over five weeks, the largest national cricket competition in U.S. history. The best amateur cricketers in the U.S. combined with 36 first-class and international players to play 51 competitive and entertaining T20 matches across 17 venues involving 18 of the 24 MiLC franchises with 312 drafted players competing in at least one match. ACE is preparing to launch its full inaugural MiLC T20 cricket season in May 2021, with MLC expected to start its competition in 2022.

Major League Cricket, which is exclusively sanctioned by USA Cricket, represents the most ambitious and transformational venture ever undertaken in the American cricket landscape. Focused on staging the highest quality T20 cricket for U.S. cricket fans, MLC will feature top international cricketers from around the globe, and provide a stage for domestic cricketers to showcase their talents to a global audience.

As the ICC’s member body for the United States, USA Cricket selected MLC as its exclusive partner for the development of a professional T20 cricket league. As exemplified by this establishment of AirHogs Stadium as a High Performance Training Center for USA Cricket, MLC provides support for both the USA’s Men’s and Women’s teams, with the goal of elevating them to the highest level of international competition.

The founders of MLC have been deeply involved with cricket in the U.S. for years, particularly with the establishment of the U.S. as a major broadcast market for the sport. MLC is co-founded by the founders of Willow TV, the largest cricket broadcaster in North America and the principals of The Times of India Group, India’s largest media conglomerate. MLC is also backed by a prominent and diverse group of investors from across the U.S.