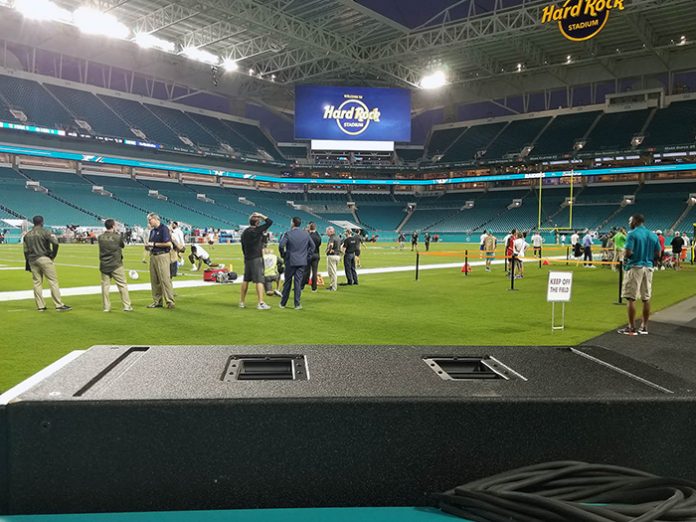 The team warms up to high-volume hip-hop that plays from the stadium’s roof-mounted full-range sound system, but the throw all the way down to the field left the low-end lacking. Obvious Choice staff remedied the situation with a Danley Sound Labs BC412 subwoofer that they roll out into the corner of the field for warm-ups and roll back off at game time.

“Hip-hop needs some real low end and the team came to me to see if there was some way I could get more of that on the field for pre-game warm-ups,” explained Bryan Alers, Obvious Choice CEO. “Rather than mess around with some kind of plan that they would need to evaluate and approve, I just brought a Danley BC412 on the next game day and put it in the corner near where the Dolphins enter and exit the field. It really filled the entire half of the field the Dolphins use with the kind of bass they were hoping for and made the ‘approval’ a no-brainer. They just asked me to make that happen every time.”

Bryan brought a Danley BC412 and everyone agreed it was perfect. Danley has been building the BC412 for many years now, but its advantages are often overshadowed by the significantly beefier Danley BC415. Nevertheless, the BC412 is an eminently respectable subwoofer that comes in at a lower price point and lower weight than the BC415. As exemplified by its performance at Hard Rock Stadium, the Danley BC412 is still a jaw-dropper.

“Like I tell everyone,” Bryan stated, “Danley subwoofers are second to none. We’re able to get the Danley BC412 onto the field quickly and then back off again in just two or three minutes. Its integrated dolly system is great. No one on the Dolphins coaching staff can get over how much bass it puts out. At first, they stopped whatever they were doing, walked over to us, and asked if all the bass they were feeling was coming from that relatively small box. They were amazed to learn that it was, and they continue to be amazed. At every game, we get staff and players walking past the sub and then looking over at us – they shake their heads like, ‘I can’t believe it!’”