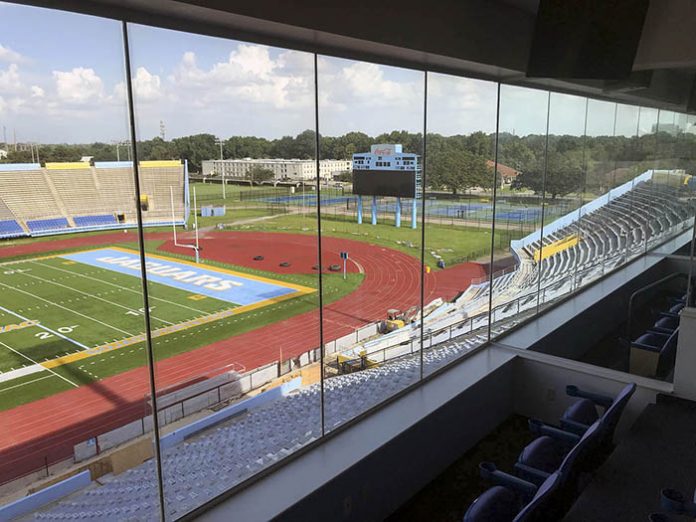 Although the 6,500-plus students at Southern University are big supporters of their SWAC NCAA Division I Jaguars football team, the much larger 28,500-seat capacity of A.W. Mumford Stadium reveals the team’s huge fan base of alumni and residents in Baton Rouge, Louisiana. Indeed, since it was first constructed in 1928, the stadium’s capacity has grown steadily and has always outpaced growth in enrolment. A.W. Mumford Stadium also hosts home games for the Southern University women’s soccer team and the Laboratory School Kittens football teams. After water and lightning damage crippled its relatively new sound system, area representatives Anderson Sales and Marketing conducted a Danley demonstration at a home game. After that, Southern was committed to getting a Danley sound system. Recently, Pensacola, Florida-based All Pro Integrated Systems designed and installed a permanent Danley sound reinforcement system at A.W. Mumford Stadium.

“We decided to go with a Danley system after a visit to LSU to check out the Danley system installed in Tiger Stadium,” explained Henry Thurman, Assistant Director of facility services at Southern University. “We were totally impressed with the performance of the Danley boxes, from the clarity of spoken word to its deep bass response to popular hip-hop music. The most important aspect actually came from the construction of each cabinet. Although it was only a few years old, our previous system was totally destroyed by moisture coming in contact with the cabinets and severely reducing performance. The Danley cabinets are solidly constructed and will definitely withstand the test of time in this southern Louisiana climate.”

Kim Comeaux of Anderson Sales and Marketing brought a pair of Danley Jericho Horns for home games after the premature demise of the previously-installed sound system. “The system we designed and installed is really just a larger version of the system Kim was bringing in on a temporary basis,” said Michael Walden, systems designer with All Pro Integrated Systems. “Henry and everyone else at the school was pleased with the Danley system, and we’ve always had great outcomes with Danley installs at All Pro. The fact that we can design a system to cover a nearly 30,000-seat stadium with just seven boxes makes the installation more efficient and cost effective.”

The new system is end-fired and consists of one Danley J6-42 Jericho Horn to cover the opposite end zone seating, two Danley J3-64 Jericho Horns to cover either side of the stadium, two Danley OS80 loudspeakers to fill in the areas close to the array that get missed by the Jerichos, and a pair of Danley BC218 subwoofers to round out the system’s deep, deep low end. Linea Research amplifiers power the system, with modest loudspeaker conditioning from onboard DSP. A new QSC Q-Sys DSP system provides input conditioning, routing, and all other signal processing functions. “When we were commissioning the system leading up to game day, we got favourable comments from across campus,” Michael said. “Faculty and staff noted the clarity of what they were hearing. They could hear and understand everything that was said.”

“All Pro Integrated Systems completed installation of the Danley system mid-season, and it debuted at one of our most-attended games of the year,” said Henry. “With almost 30,000 fans in attendance, we found that there was not a single dead zone in the stadium; we had excellent coverage. Because of this, we definitely saw an increase in fan participation, which made the game a more enjoyable experience for everyone. We will definitely be using Danley in the future for our other sports venue needs.”