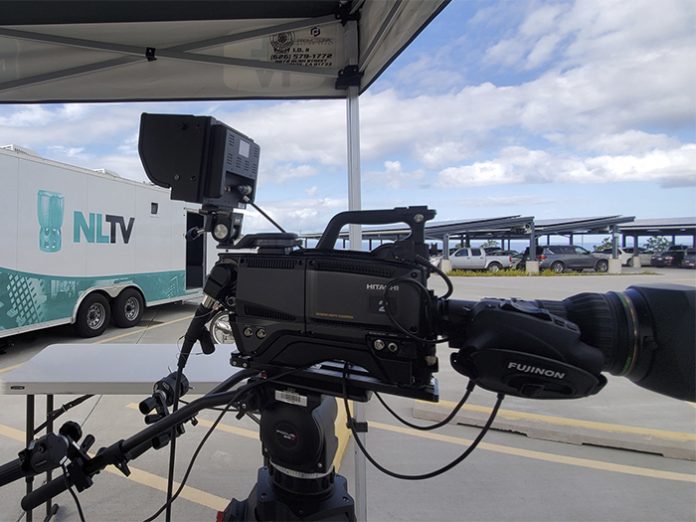 Nā Leo TV (NLTV) is the public access television station run by Nā Leo o Hawai’i (NLOH), the non-profit leader for media services on the “Big Island” of Hawai’i. When the Hilo-based Public, Education and Government (PEG) broadcaster expanded its coverage to include more sporting events, it chose SK-HD1800 cameras from Hitachi Kokusai Electric America, Ltd. (Hitachi Kokusai) to elevate the quality of its productions and meet the rigorous demands of live sports.

NLTV delivers relevant, diverse, and interesting PEG programming to citizens across the island through three cable channels, its website, and a mobile app. The station began looking at new cameras last year to achieve its goal of expanding its offerings. “We wanted to start producing more live events such as high school sports, but our existing prosumer-level HD camcorders weren’t up to the task,” said Matt Cordero, production manager at Nā Leo TV. “Our president wanted a higher quality standard, and we needed cameras that would respond well in low light and could zoom all the way down a football field.

“Our previous cameras also required tons of cabling – including separate video, communications, and power – that was cumbersome for field use,” he continued. “I wanted the simplicity of a single SMPTE fiber cable for each camera, the higher quality of 2/3-inch sensors, and the ability to use longer, B4-mount lenses.”

Oahu-based Da Crew Production and Engineering Group arranged a side-by-side comparison between three major camera brands. “I liked what I saw with the SK-HD1800,” Cordero recalled. “Watching on broadcast monitors and multi-viewers, some people couldn’t see the difference between it and more expensive competitors, and the rest of us pointed to the Hitachi camera as having the best quality.”

NLTV purchased four SK-HD1800s and started using them in their studio and field productions in late summer of 2019. The cameras travel around the island in the station’s 24-foot production trailer, which is stored next to the 18-foot high, 50×25 foot main studio. This lets them use the trailer as the control room when shooting in the studio. Three of the cameras are typically deployed on Cartoni or Sachtler tripods, with one operated handheld. NLTV purchased five Fujinon lenses – three 22x, one 14x super-wide, and one 99x box lens for sports productions.

In addition to being pleased with the SK-HD1800’s overall visual quality, Cordero has been impressed by the camera’s performance in poor lighting conditions. “The Hitachi cameras’ low-light handling has been awesome,” he said. “A lot of our high school stadiums aren’t very well lit, but we’re able to run the cameras at 6dB gain or less and get very good-looking results.”

The setup simplicity and ease of use of the SK-HD1800 has also proven beneficial for NLTV. “As a public access station, we utilize a lot of volunteers – including high school and college students – who may not understand all the technology,” explained Cordero. “I can get someone with little or no experience up to speed and comfortable with these cameras in just minutes. I also like how the structure and language of the menus are essentially common sense, rather than needing to dive into too many different buttons and submenus to get at the features I’m looking for.”

The move to Hitachi camera systems has also enabled NLTV to manage the cameras from their mobile control room while supporting the streamlined cabling infrastructure Cordero sought. “The ability to control everything remotely from the truck over SMPTE fiber is fantastic, as is using the Ross Dashboard software on a Surface Pro tablet to adjust video settings,” he said. “The cameras are also much lighter than others I have had experience with, which is great for field use.”

While social distancing cut short NLTV’s spring sports season and temporarily reduced the number of productions in its studio, station staff are enjoying the improvements the SK-HD1800 cameras have delivered. “They have enabled us to take on more types of production projects and have enhanced the quality of our programs,” Cordero concluded. “Everything looks much better with these cameras, and people have noticed the difference in our broadcasts.”