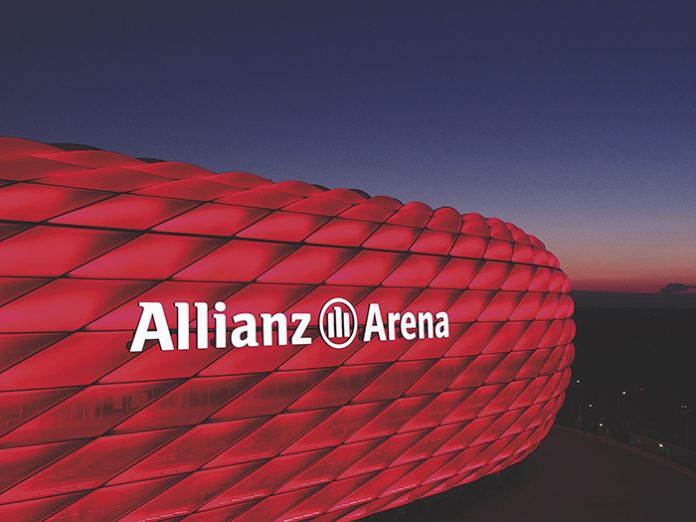 Inaugurated in 2005, Munich’s Allianz Arena, with its iconic façade of almost three thousand air-filled panels which made it the first stadium to display a full colour-changing exterior, is one of the best-known football stadiums in the world. Inside, too, the three-tiered stadium construction leaves an impression on the 75,000 plus spectators who come to see top national and international sport, and especially to support home football team Bayern Munich. For this season, the sound system in the Allianz Arena has stepped up its game. In cooperation with the engineering and planning office Müller-BBM, L-Acoustics Certified Provider System Integrator, Wilhelm & Willhalm event technology group, have installed an extensive Kara system from L-Acoustics.

Since the Arena opened, Wilhelm & Willhalm has been the infotainment technology service provider to the venue, and won the upgrade project when Müller-BBM launched a tender for the new sound system which would provide optimized, uniform sound level distribution across all three tiers, improve the transmission quality for music playback, as well as increase speech intelligibility for announcements. In addition, the new system needed to anticipate the upcoming EURO 2020 where, as part of the first pan-European European Football Championship, the only matches in Germany will be staged in there. Three preliminary round matches and a quarter-final are already scheduled and the venue’s sound system needed to respond to strong UEFA stadium standards.

Headquartered in Planegg, near Munich, Müller-BBM, previously worked with the Arena and the Wilhelm & Willhalm event technology group to optimize room and building acoustics at the venue. This experience helped when it came time to the design of the new sound reinforcement system. “The membrane roof of the Allianz Arena creates considerable reverberation in the spectator area. For this reason, care was taken to design a system that delivers sound to the spectators, minimizing reflections,” explained Thomas Dürrbeck, who was responsible for planning and construction at Wilhelm & Willhalm event technology group.

Weight restrictions also played a decisive role: “Due to the static restrictions in the roof area of the stadium, only an eight-inch array system was considered,” adds Harald Frisch, sound engineer at Müller-BBM. “L-Acoustics’ Kara system offers an almost ideal ratio of weight, precision of coverage, achievable sound pressure level and sound quality.”

In total, the L-Acoustics installation in the Arena comprises 266 Kara line source elements as well as 54 SB18 subwoofers for the main PA, with 48 ARCS WiFo as delay arrays in the curved areas and 70 5XT coaxial compact loudspeakers under the balconies. The system is driven by 110 LA4X amplified controllers with a system output of 440,000 watts, which are distributed over ten central amplifiers, each with two 40U system racks.

“The cooperation with Müller-BBM was excellent right from the start, extremely flexible and professional in every single phase of the installation,” said a spokesperson at Wilhelm & Willham’s Dürrbeck. “From the very beginning it was clear that all parties involved were working together as a large team to implement the project optimally for the customer”.

Jürgen Muth, Managing Director Allianz Arena München Stadion GmbH, agreed, stating: “the new Kara PA system is the result of trusted cooperation with our technology partner Wilhelm & Willhalm, and Müller-BBM as the executive planning office. With L-Acoustics, we chose one of the world’s leading suppliers in the field of professional sound system technology, who offers a complete package of sound characteristics, flexibility and cost-effectiveness.”

“We are delighted that the Allianz Arena Munich now has a Kara system that meets the stadium’s leadership requirements, as well as the requirements of UEFA,” concluded L-Acoustics Director of Business Development, Jochen Frohn. “The great cooperation between Mueller BBM, Wilhelm & Willhalm and the Allianz Arena enabled planning, installation and commissioning of the system within a very short time. Hearing the system when it was fired up for the first matches filled us with great joy and pride.”