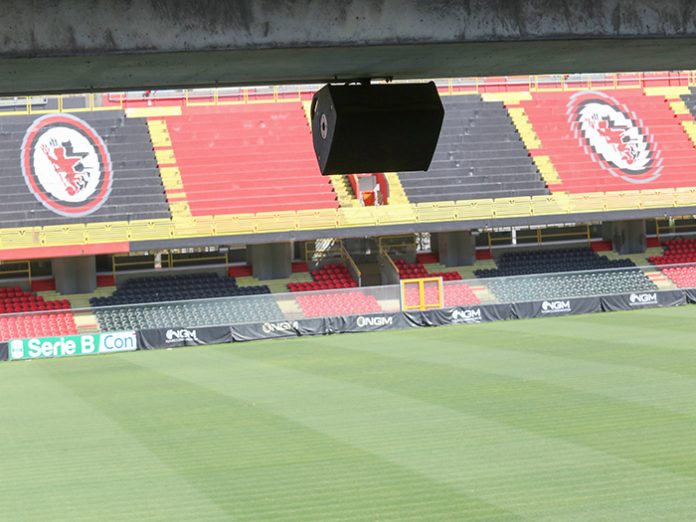 The 17,368 capacity Pino Zaccheria stadium, the home field of Foggia soccer team located in Italy’s south-eastern Apulia region (nicknamed the Red and Black Devils of the South), recently underwent an in-depth upgrade in order to meet the latest specifications for the country’s Serie B (the equivalent of the second division). The work included a new sound reinforcement system, supplied by Centro Cultura Musicale.

The upper tier of the seating on the each of the curves’ and the open air stand are covered by four Stadia 100-30 long-throw DPRWG loudspeaker systems. Each curve has a Stadia mounted on one of the ground’s lighting pylons and the stand has two mounted over the centre of the main stand’s roof.

Outline loudspeakers were also installed outside the pitch, in the turnstile zone, in the form of six Eidos 15 two-way full-range enclosures, powered by an Outline M5000-4 four-channel PWM power amplifier.

As well as the new PA system, the ground’s upgrade also included a new lighting system for night matches, electricity generators and contemporary seating. Beyond meeting the new safety regulations, new booths and facilities were added for broadcast coverage, as well as upgrades being made to the offices, dressing rooms and turnstiles.

Augusto Rinaldi of Centro Cultura Musicale stated: “The sound reinforcement system is particularly effective thanks to its clear sound as well as ensuring that there is no sound spill into the surrounding zones. The set-up’s user-friendliness is definitely the icing on the cake and the public has appreciated and acknowledged the results, which exceeded all of our expectations.”