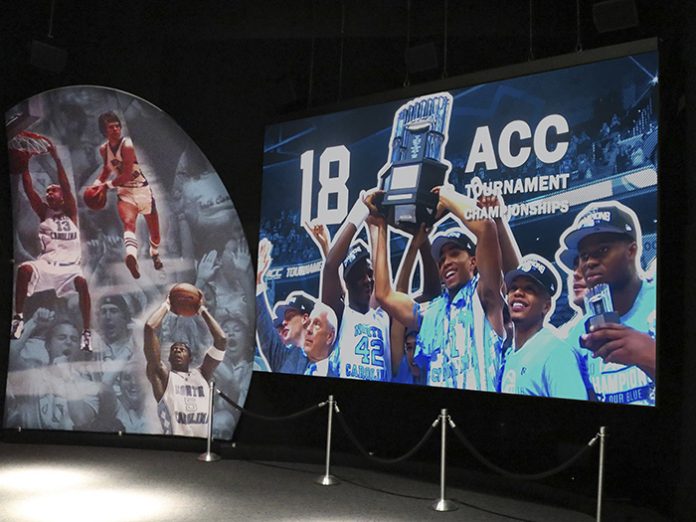 Located on the campus of the University of North Carolina, the Carolina Basketball Museum originally opened in 2008 and chronicles the history of the UNC basketball program. Highlighting Carolina’s numerous NCAA and ACC Championships, along with the players, coaches and staff members that made it all possible, the interactive museum recently underwent a renovation on the heels of its 7th National Championship. Working with the experiential brand specialists at Advent, the museum wanted to update their main video display as part of the branding refresh, and they did so using a 2.8mm FLEXTour LED video solution from PixelFLEX.

“We had previously worked with the University of North Carolina on an update for the Smith Centre locker room that went really well, so they asked us to come back and take a look at the Carolina Basketball Museum,” said Davy Fisher, Advent Design Principal. “It was a great project because they were fresh off the excitement of their latest National Championship and they wanted us to update the storytelling, freshen up the branding, and reframe the experience through the use of more current technology.”

A robust, high-definition and curve-able LED video display, FLEXTour is designed specifically for the high demands of live entertainment productions. With its unique rigging capabilities that allow for traditional and off-set configurations, each 500mm x1000mm tile is fully front-serviceable and its integrated climbing ladder allows for quick access to displays flown high overhead. Built with the highest standard in components including the new NovaStar A8s receiving card, FLEXTour is completely flicker-free making it one of the premier LED video design solutions available today.

Davy continued: “The old space was a little bit off-brand with different blues and varying signage headers over elements that were needing to be related to each other. Our main goal was to make it a cleaner branding experience and simplify the story, so a good portion of the project was replacing and upgrading all of the digital surfaces and get it on-brand, through colour and language consistency.”

Turning their attention to the digital surfaces on the museum, one of the main displays was an LCD projection system which hung at the entrance. Needing a feature to capture the attention of guests from the moment they arrive, the previous projection system proved difficult to format and never seemed to measure up to the task.

“The initial installation that we replaced was a strange, concave screen that had an image projection-mapped onto it, but it never really worked the way they wanted it to,” explained John Downie, VP of Digital Experience, Advent. “It’s a rather large space and the display is the first element you see when you walk in. With the original system, they found it hard to update and it required a lot of post-production to format correctly. Knowing this was an issue, we decided to give them an LED video solution that was easy-to-update in a 16:9 ratio, so they could easily drop in high-resolution, wide-screen footage without any post-production needed.”

Ready to begin the installation of the FLEXTour LED video display, the video panels where easily connected to a header bar which hangs from the ceiling using aircraft cable. Measuring 16-feet wide by 9-feet tall, the system was quickly ready for content which would be driven by the proprietary Advent content management system.

“For the control, we are using our Advent web-based CMS that allows the client to quickly update content through the simple upload of a media file, while also giving them options for various modes of operation,” continued John. “During the build-out process, the first reaction upon turning it on was absolute amazement. With the previous projection image, the colours were never quite right, and it just didn’t look like a quality display. For that to be replaced with a beautiful, high-resolution, tight pixel-pitch FLEXTour LED screen, it really blew their minds.”

Now complete, the Carolina Basketball Museum reopened its doors for the start of the 2017-18 season ready to showcase a completely new fan experience. Greeted by the FLEXTour LED display from the moment they enter, the museum has become a better reflection of a successful program.

“When fans now walk through the doors of the Carolina Basketball Museum there is an immediate feeling that you are about to have a great experience.,” concluded Davy. “The old projection system had a lot of light-loss which translated into a diminished experience. With a feature that needs to be so bright and so vibrant, the FLEXTour LED video is a significant upgrade. Being the first thing you see when you walk into the space, it presents as a wonderful showcase for the UNC athletes and the quality of their programme.”