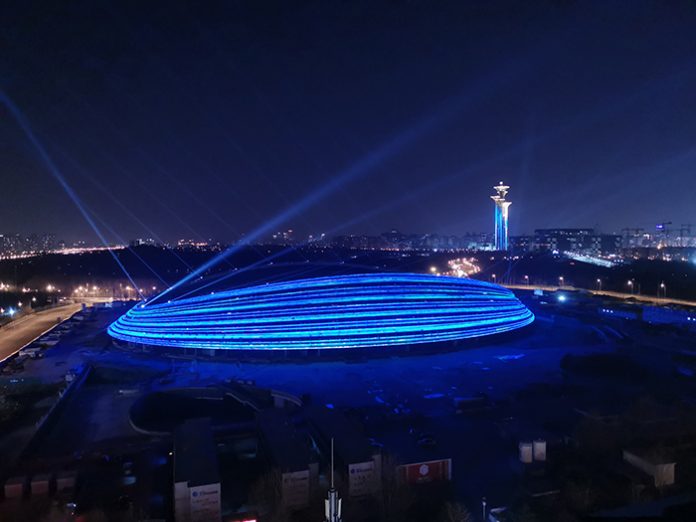 On the 4th February, the world will be watching Beijing celebrate the start of the 2022 Winter Olympics as the world’s first dual Olympic city.

The only new permanent venue for the 2022 Winter Olympics and Paralympic Games, the National Speed Skating Oval or the ‘Ice Ribbon’, will be unveiled under Olympic lights for the first time since its completion in 2021.

The 12,000 seat venue will host the speed skating events and will award 14 gold medals.

Designed as a spectacular new landmark by global sports architecture firm Populous, after winning an international design competition, the ‘Ice Ribbon’ was created as a symbol of Chinese cultural heritage that celebrates the elegance, precision, pace and dynamic of speed skating.

From its Asia Pacific headquarters in Brisbane, Populous managed a multitude of stakeholders across five countries and three offices to win the rigorous design competition over 60 other firms. The win recognised Populous’ unparalleled Olympic experience and their involvement in their 14th Olympic Games, both summer and winter.

Populous Senior Principal and co-Project Director on NSSO Andrew James said to be selected as the chief designer of an Olympic sports venue was a huge honour.

“The winning design for the ‘Ice Ribbon’ was created in an intense time frame and was forged through several concepts and many iterations to develop a spinning concept into its final form.

“It became a global effort with our team in Beijing, Brisbane, India, London and America drawing on our experience from Oval Lingotto in Turin, Italy and our design of Fisht Stadium in Russia, home of the 2014 Winter Olympic Games,” James said.

“It was an extraordinary project, the key building for the 2022 Winter Olympics…and continues to receive accolades from all walks of life.

Sitting together as iconic buildings along the central axis of the Beijing Olympics’ ‘Bird’s Nest’ and the ‘Water Cube’ venues they said, “The National Speed Skating Oval is not only a world-class sports facility designed to be among the best in the world, but it also brings an international landmark for Beijing and enhances the landscape and urban fabric of the area.”

When reflecting on the characteristics of Olympic speed skating, Tiric Chang, Principal of Populous in China and the co-Project Director of the NSSO drew on childhood memories of growing up in Beijing to create a beautiful interpretation of Chinese culture and heritage.

“Much of the inspiration for the conceptual design of the ‘Ice Ribbon’ came from a traditional ice game played in old Beijing which involved a high-speed spinning ‘ice top’.

“The ribbons of the design make reference to the floating silk ribbons of the artwork my family had dedicated their time to – which was the study and preservation of the Dunhuang Grottoes, a significant collection of Buddhist art from the Tang dynasty.

“It guided the design team to boldly extend the concept of a high-speed rotating ice top to creating 22 rotating light bands for the façade, which not only represent the ice surface and the shape of the oval, but also perfectly demonstrated the high-speed movement of speed skaters,” Chang explains.

In addition to the striking appearance of NSSO, the design process has also been thoroughly considered in terms of its practical functions to meet the requirements of the International Olympic Committee (IOC) and the International Skating Union (ISU).

Importantly, the design also adds to the intense and exciting atmosphere where every movement and sound of the speed skating blades can be seen and heard by everyone in the oval.

In the lead up to, and during the Games, NSSO will be the home of training for speed skating events and Olympic competition.

Following the Games, the design’s legacy allows the transformation of the facility to serve its long-term purpose as a real hub for the community, to hold Winter festivals, public ice skating, ice hockey or private ice-based shows and events.

This legacy design will support the Chinese Central Government’s Ice and Snow Sports Development Plan which aims to involve 300 million people in ice and snow sports by 2025 and the IOC’s ‘Agenda 2020’ to ensure there is real cost-benefit associated with hosting the Games.