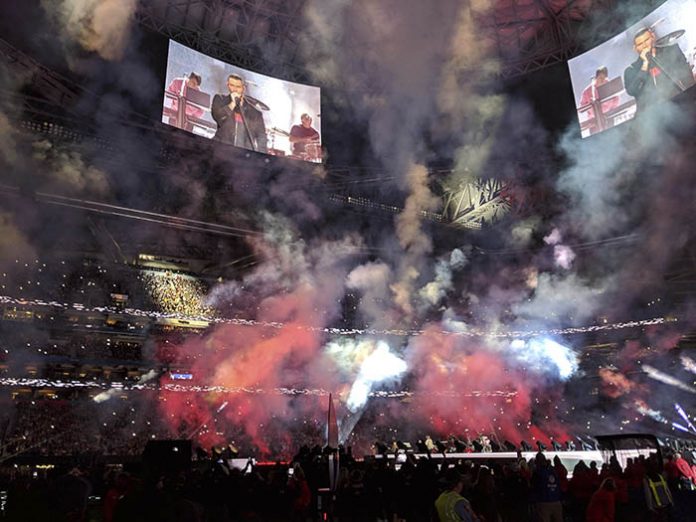 Orlando-based Professional Wireless Systems recently handled all wireless microphone and IEM systems management for pre-game, half-time entertainment and post-game – along with the wireless microphone utilised by the referee – during Super Bowl LIII held in the Mercedes-Benz stadium in Atlanta. This is the 22nd year that ATK Audiotek has tapped PWS to provide wireless support for the Super Bowl.

“It is pretty amazing to think about all of the changes that have occurred in wireless technology over the course of 22 years,” explained Jim Van Winkle, General Manager, PWS. “This year was no different in that we implemented a number of new systems that helped us handle the exceedingly crowded RF environment in Atlanta – where the TV repack hasn’t even happened yet.”

As in previous years, PWS started planning back in October, with a site visit to Mercedes-Benz stadium. Jim and Gary Trenda, lead RF technician for PWS, made the trip along with ATK Audiotek team members Paul Liszewski, Brett Valasek, Kirk Powell, and George Schwartz. The site survey provides critical information about the physical site and local RF environment that Van and Gary need to design the game day wireless system.

This year, the main RF equipment location was on the NFC champions side of the field near the southwest 20-yard line. From there, the PWS team deployed the antennas necessary for the wireless microphones and in-ear monitors to provide state-of-the-art audio for one of the most-viewed television events of the year.

“With the available frequency spectrum shrinking, we’re starting to look for alternate areas to operate in.” explained Gary. “This year, we deployed a specialised antenna system in the 940-960 MHz STL band. The STL band is only available to licensed users, but this 20 MHz of spectrum can be similar to having three unused TV channels to operate in, depending on location. We decided to deploy a system of PWS 950 MHz Helical Antennas and utilise wireless microphones operating in that range.”

A Wisycom MFL RF over fibre (RFoF) system allowed for much longer runs than traditional coaxial cable and with minimal signal loss. The Wisycom units were used for both receive and transmit applications. This allowed for a second pair of receive antennas, along with additional IEM transmit locations. Wisycom provides a wideband optical link for up to four RF channels multiplexed on a single strand of fibre optic cable.

“We used the Wisycom system last year and were very pleased with it,” added Jim. “Not only is it incredibly reliable, but it allowed us quite a bit of flexibility, which is necessary during an event of this magnitude. When connected to the Axient Digital microphone system, it offers clarity and reliability in crowded RF environments like Atlanta.”

Gary added: “The Axient Quadversity feature allows placement of two pairs of antennas in different zones or doubling of antennas in one zone, improving RF signal-to-noise in challenging environments. In this case, we deployed antenna pairs on both the AFC and NFC sides, ensuring reliable operation anywhere on the field.”

The Axient Digital system’s frequency diversity capability also ensures that a secondary frequency is immediately available as a back-up if the primary frequency degrades. Both the Axient and PSM-1000 systems are compatible with Shure’s Wireless Workbench control software. PWS technician Cameron Stuckey operated the Wireless Workbench setup. It was used for live monitoring, including RF and audio level timeline plotting, on game day.

PWS’s Helical Antennas provided longer range and greater reliability than standard antennas. Unlike traditional whip and similar antennas, which transmit and receive signals in a single polarisation, the circular polarisation of the helical antenna can better match the complementary signal, greatly reducing the risk of drop-outs.

The RF energy rotates through 360 degrees of polarisation, providing crystal clear reception in the artist’s ears and in the wireless mics receiver no matter how they may move about or where they go on the stage. This makes the PWS Helical Antenna particularly useful in large scale events, like the Super Bowl, where it may be virtually impossible to control the orientation of both the sending and receiving ends of the wireless communication.

“This is a perfect example of how things have changed over the years,” added Jim. “20 plus years ago, we didn’t have as much competition for bandwidth so there was less concern about potential problems. We have always coordinated closely with the GDCs. The airwaves are so crowded now that proper coordination is more important than ever. Even once we have our channel assignments, you never know what might happen, so being prepared is key.”

Part of being prepared takes place the Thursday before the Super Bowl – they call it RF War Games.

“The main unknown is the other wireless operators on site,” said Gary. “Everyone is required to coordinate with Voss and the GDCs. The goal is reliable operation for all wireless users. On the Thursday prior to game day, all the main wireless users will come into the stadium and try to simulate the gameday RF environment. The GDCs have everyone turn on their wireless systems and we see what happens – we fondly refer to this process as RF War Games.”

This is an opportunity for the PWS team to go through and make adjustments, modify gear placement and rework anything else that needs to be corrected prior to the game.

“We see how it all works together and then make any necessary adjustments,” Gary concluded. “This is usually the most congested wireless environment we work in and there’s always the possibility someone could accidentally start transmitting on the wrong frequency, which can create unwanted interference. The key is to make sure all your equipment works well with the other systems, and to plan for the unexpected – it’s all about preparation. The entire PWS team did an amazing job this year. It feels good to have a successful show with zero technical issues in an environment like this.”

Jim concluded: “It’s a group effort that has been taking place for 22 years, which is a testament to everyone involved. Deploying new technology, working with show-stopping half-time entertainment, and addressing any challenges that arise….it’s always a terrific event and something we are quite proud to be a part of.”