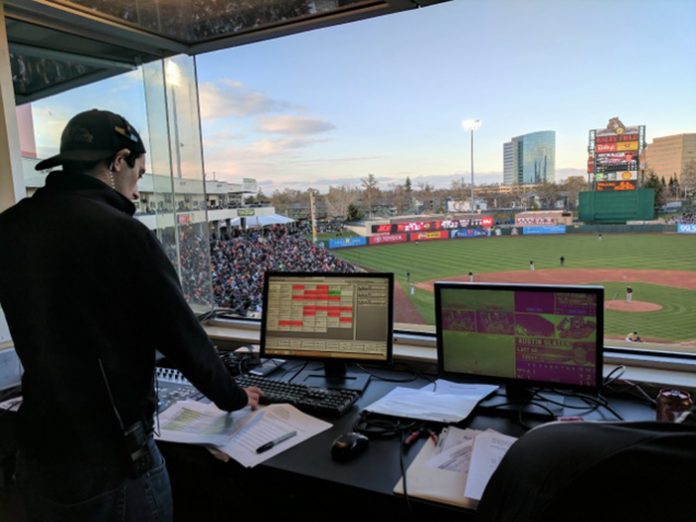 Raley Field, home to the Sacramento River Cats, the Triple-A league sibling team of the San Francisco Giants. Trevor, who is responsible for everything attendees see and hear other than the gameplay itself, knows that the sound is a crucial part of the fan experience.

Just before the start of this baseball season, he installed a QSC TouchMix-30 Pro compact digital mixer as the ballpark’s audio nerve centre.

“I’m in charge of all park entertainment on a game day and I also DJ at games,” Trevor explained. “All the graphics and stats you see on the video boards including the on-field promotional crew, the P.A. announcer, the ballpark organist and the music playlists fall under my umbrella.”

As with all of these aspects of the game day at Raley Field require sound reinforcement, Trevor appreciates the TouchMix-30 Pro’s generous complement of inputs.

“On a given game day, we’ll have, say, the graphics computer, which is feeding audio along with the video or graphics it’s displaying. Then, there’s the P.A. announcer, both on-field wireless microphones and the stereo inputs from the DJ playlist computer. If we have our organist here for the game, that’s another stereo pair. Lastly, when we have fireworks, we’ve used a CD player for background music. We still have inputs to spare, so we’re planning on adding more sources.”

Ballparks like Raley Field are huge venues, so the QSC TouchMix-30 Pro’s ample Aux outputs combined with its Wi-Fi remote control capacity proves vital to Trevor being able to check and adjust the sound from multiple listening positions.

“On game days, I am always running around. The number one thing that caught my eye about TouchMix is, while I’m walking through the ballpark I can control everything from my iPhone or tablet. If someone says, ‘Hey, this or that level is too high,’ I can go boom, pull it back, EQ it, mute something that’s being a problem, whatever I need to do.”

“I’m in the sound booth often during games, but it’s the times when I’m not that is most important,” he continued. “We have speakers all around the concourse, and on the fascia up above the suites. The TouchMix is also feeding additional speakers inside the VIP suites and more still in our Legacy Club, which is a separate indoor room.

“There are also the outfield speakers. Even with the windows in the sound booth open, I can’t necessarily tell if something in a particular area is too loud or too soft, too effect-heavy or too dry, or EQ’ed ideally. So being able to actually go out there, pull out my phone, and make tweaks is absolutely critical, and I can do it without constantly running back to the control room. Working this way wouldn’t be possible without TouchMix.”

The emotional impact of a baseball game is at its best when what fans hear supports what they see from one play to the next. Trevor finds that for this purpose, the QSC TouchMix-30 Pro’s studio-grade effects processing slides right into the home.

“For the P.A. announcer, I can add in reverb and delay to give things an arena-like feel, or auto-tune pitch effects for a hip-hop or EDM vibe.”

“Let’s say we want to do a ‘pump-up’ for a tense anticipation in the ninth inning, with that ‘epic announcer voice’ you’d imagine for a rallying moment. I can just add that to the microphone channel right onboard, without any separate effects unit or software or external routing. And it’s easy with TouchMix to get the perfect sound for that moment.

“When the ballpark was empty one night, I got on the P.A. mic and duplicated its channel. I experimented with effects on that channel and saved it when I had something I liked. Now, when we want the ‘epic’ voice, I can just bring that channel up and bring down the ‘normal’ one.”

Why does Trevor think audio is so important at an event where people are mainly there to cheer on their team? “I grew up going to games as a kid,” he recounts. “If you close your eyes at your favourite ballpark, you’ll become aware of how familiar the sound is. Every stadium is built differently, and each has its own unique sound. That creates nostalgia.

“It creates a sense of connection to the team. With all the action we have going on at once— the play, the promos, the end-of-game productions — if people enjoy the sound and the music, they’re going to forget about things like the weather or the traffic on the way here, and they’re going to come back.”

“At Raley Field, we’re trying to be very intentional about the sonic component of the fans’ experience, from the DJ playlists having a little something for everyone to anticipated ballpark organ, to effects on the announcer’s voice when needed,” he concluded.

“For all those things, and especially because I can control them from anywhere in the park, I’d recommend TouchMix-30 Pro any colleague who does what I do. The TouchMix mixer has literally changed the game for me.”