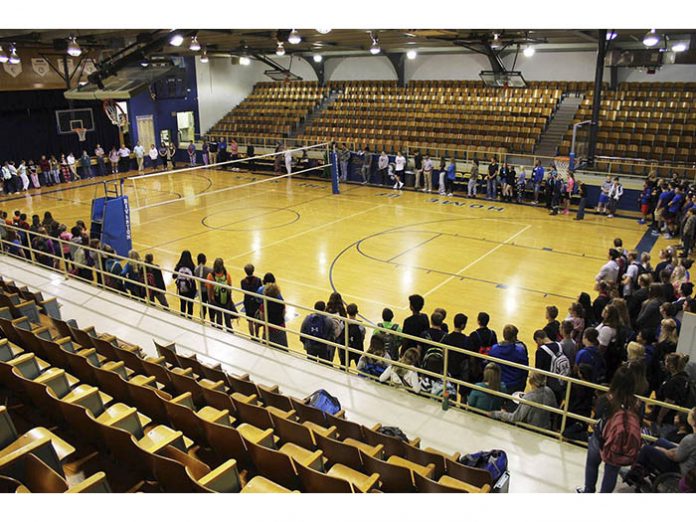 The new gymnasium has permanent balcony seating, plus rollaway bleachers on either side of the court. In addition, overflow audio addresses folks who are in the foyer just outside the gymnasium. “The Riverton staff wanted a system that could flexibly accommodate all of the various uses they plan for the gymnasium, but they also wanted a system that would be intuitive and easy to operate for non-technical staff,” explained Nate. “Using Ashly Audio’s well-integrated DSP and customisable user-interface technology allowed us to give the staff various ‘scenes’ for different event types that turned on appropriate inputs and loudspeakers. For example, when they use the gymnasium floor for events with live mics, they can select a scene that mutes the down-firing speakers to avoid feedback issues.”

Riverton staff control the system from three well-placed Ashly neWR-5 programmable network wall-mounted remote controls. TEC custom programmed the neWR-5s to allow for “scene” changes, as well as strategic input volumes and overall output volume. “Ashly was a great choice for several reasons,” Nate said. “Ashly user controls are exactly what Riverton needed: simple with limited access to get what they need and nothing else. Moreover, all of Ashly’s gear is reasonably priced and tremendously reliable. And since we use Ashly for plenty of our installations, we can offer great support.”

Ashly Audio Inc. is recognised as a world leader in the design and manufacturing of high-quality & high-performance signal processing equipment and power amplification for use in the commercial sound contracting and professional audio markets. The 42-year-old company is headquartered in Webster, New York U.S.A.