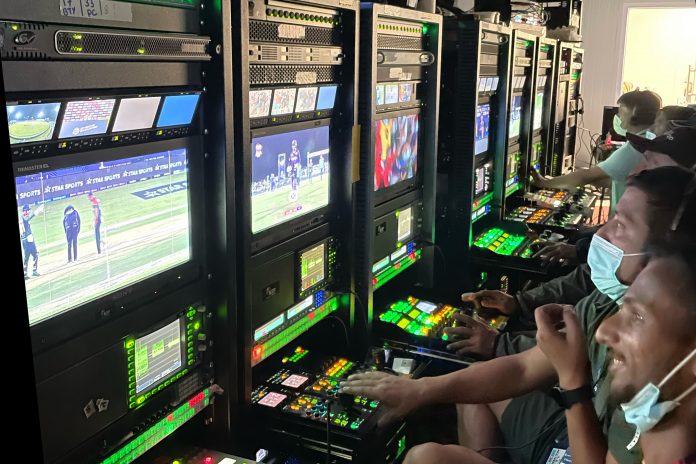 As Australia were crowned the new ICC Men’s T20 Cricket World Champions, the events of the historic final against New Zealand at the Dubai International Stadium were broadcast to the world with the help of RTS intercoms.

Due to a challenging COVID-19 situation, the month-long tournament moved from its original host nation of India to Oman and the UAE and broadcast from a variety of stadia across the two countries. To make the production as smooth as possible, three crews and four fly-packs were deployed to deliver the same production values at each venue.

“We have had to deploy 51 RTS keypanels with a mixture of legacy RTS equipment and KP-4016 panels,” explained comms engineer Michael Southgate. Utilizing wide angle TFT displays for quality resolution and longer display life, the KP-Series keypanels have been used over various areas including the main broadcast control room and commentary production area, as well as the edit facilities and match officials’ areas. Providing enhanced digital audio quality, free of noise, delay and other artefacts, the RTS panels ensure all communication is perfectly clear, ideal for a live sporting event.

At the heart of the system is the ADAM matrix frame, providing fully redundant communication with dual-purpose ports for both keypanel and four-wire audio. The modular matrix intercom utilises a patented time-division multiplexing (TDM) technique, meaning it grows linearly as users are added. For the purposes of live broadcasting, the ADAM system supports redundant controllers, allowing for automatic changeover in the event of failure.

The combined RTS system ensured a flawless production across the different venues. The OMNEO IP-based media networking architecture meant the solution could be easily combined with other elements in workflow, such as the audio console and that every member of the crew could benefit from crystal-clear comms.