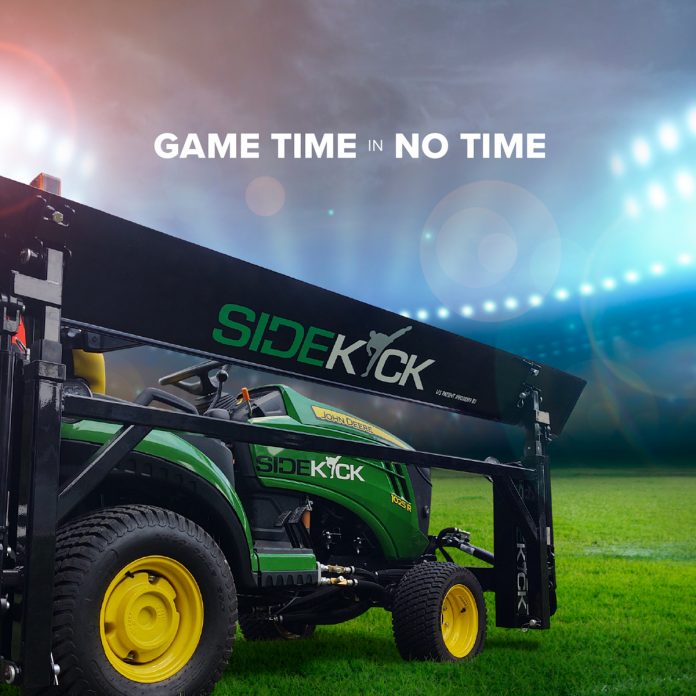 SIDEKICK USA, manufacturer of the revolutionary turf installation machine, announced today that its award-winning* apparatus is officially patented in Europe. The Sidekick installer – the only one of its kind – will now be fully protected throughout Europe in addition to numerous other patents around the world.

“This patent is a massive step forward for Sidekick,” said Paul Carlson, Founder and CEO of SIDEKICK USA LLC. “By protecting our invention, we have ensured that we truly are a one-of-kind product that European stadia and contractors will look to for fast and seamless turf installation – with a playing surface that is not only safer than alternatives but immediately ready for play as well.”

Through its patented design, the Sidekick is optimised to gently push turf together during the installation process. Without the proper tool both natural and hybrid turf installations are extremely challenging. This is due to cuts of turf being approximately six centimeteres thick, over one meter wide, and can weigh up to 97 kilograms per square meter. The Sidekick is an advancement from the crude methods – such as pulling the sod by hand with rakes – used by installation crews, often resulting in exposed seams or tears, which can pose serious injury risks to athletes.

The Sidekick mechanises and streamlines the installation process, speeding it up considerably. This also frees up turf management teams to focus on other important areas of the install. Prior to the Sidekick, a full field replacement could take upwards of three full days of backbreaking labor. Now, the entire process typically takes only one day with the Sidekick, and with far less physical effort. After completion, the field can be ready to use the same day. This also allows for more activities on the field – including sporting events and concerts – to take place.

Sidekick is the official equipment and partner of Rose Bowl Stadium in Pasadena, California, as well as distribution partners with John Deere, STEC Equipment, and HG Turf Group. It is also responsible for aiding turf installations at over 17 stadiums in the National Football League, such as Allegiant Stadium, Lincoln Financial Field, and Levi’s Stadium – including Super Bowl 50. Additionally, Sidekick has been utilised for both natural and hybrid turf installations around the world including Austrialia, New Zealand, Israel, and Japan – most recently at Yokohama International Stadium and the Olympic Stadium in Tokyo. It has also been used in a number of stadiums in Qatar leading up to the FIFA World Cup 2022.