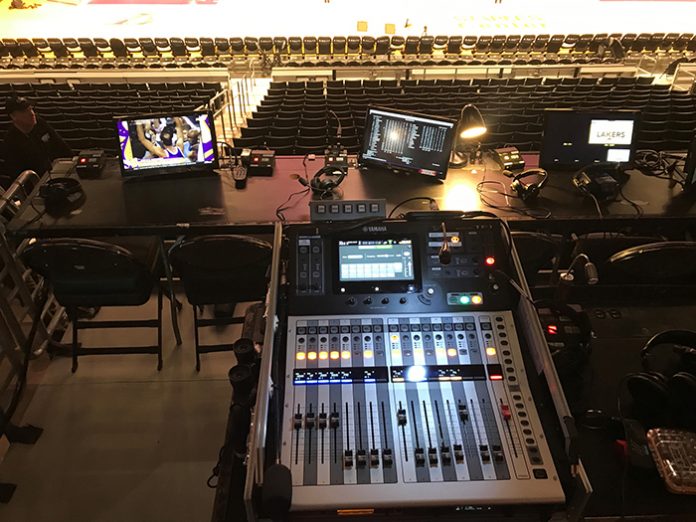 Freelance Engineer Michael Dooley has worked on hundreds of remote broadcasts for various radio stations over the last 30 years. In 2004, he began running broadcasts for LA Lakers games, which are aired on the team’s flagship station ESPN LA 710 as well as 16 stations in Fresno, San Diego, Las Vegas, and elsewhere. To ensure that he continues to produce high-quality broadcasts for one of the country’s most popular sports teams, Dooley relies on the Dante®-enabled Model 205 Announcer’s Console from Studio Technologies, manufacturer of professional audio, video and fibre-optic solutions.

Michael’s key challenge was finding a more permanent solution to his cough box setup. His previous analogue designs included several different cough box, mic switch, and headphone amp combinations that didn’t require a wall wart at each position. While he had tried several products over the years, there wasn’t a solution that suited his broadcast needs, as well as his space constraints.

“After I saw that Studio Technologies had created very compact, highly functional announcer boxes with Dante capability, I decided to convert my Lakers broadcast gear to digital,” said Michael. “Some sports allow the broadcast teams to spread out in their own broadcast booth, but not basketball. I have five broadcast positions squeezed into one-and-a-half eight-foot tables. Everyone has about two-feet of space at the broadcast table. With laptops, stats monitors, and paperwork, it gets crowded. Also, the recently added tally output function to the microphone control jack now allows me to not only turn the mics on and off with a remote switch, but it also enables me to see which microphones are on or off. This is very convenient when an announce position is on the other side of the broadcast table.”

The small footprint of the Model 205, along with all its advanced audio capabilities, made it the perfect console for Michael. The unit offers a unique combination of analogue and digital audio resources housed in a compact, rugged steel enclosure intended for table-top use. Along with excellent audio quality and a user-friendly design, the Model 205 supports Dante Audio-over-Ethernet connectivity and AES67 compatibility for integration into contemporary applications.

The Model 205 allowed Michael to send up to four feeds and receive three feeds, all via Dante to each announcer and producer position. The two talkback buttons on the Model 205 enabled him to establish multiple on-site talkback channels, including a private talkback loop for the on-site producer to talk to the station in the middle of play-by-play. In the past, the producer was only able to communicate to the station during commercial breaks and time-outs.

All of this is achievable in a way that wasn’t possible with an analogue setup. According to Michael, he previously had to use a 12-channel snake to connect analogue boxes with separate cables for each audio input and output. The Dante capabilities of the Model 205 only requires a single CAT5 cable for four input channels and three output channels, along with serving as a power source.

“Using the Dante connectivity, I’m able to set up a five-position broadcast area that doesn’t use any XLR cables,” said Michael. “The combination of built-in compressors and clean mic preamps give me superb audio from each announcer. It works flawlessly within my new broadcast workflow.”