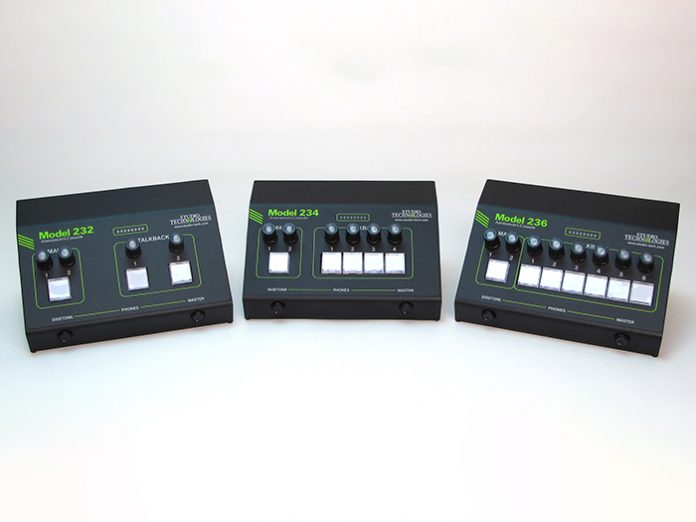 Studio Technologies launches a new series of Announcer’s Consoles with Dante Audio-over-IP connectivity, superior audio quality, and a flexible set of features that supports a wide range of live commentary and related applications. The new line of Announcers Consoles includes three products – the Model 232, Model 234, and Model 236. All feature a “pro quality” microphone input circuit, Dante and analog output channels, plus two, four, or six talkback inputs and outputs. Each unit can be easily incorporated into a Dante- or AES67-based network and is compatible with the Dante Domain Manager (DDM) application.

“We designed these units such that they can be used as part of just about any on-air or live-event commentary application,” said Gordon Kapes, president of Studio Technologies. “In addition to their terrific sonic performance, we built-in an incredible number of options that let their performance be easily optimized. We’ve also included some unique, specialized features so they will work very well in REMI/At-home applications.”

The unit’s high-performance microphone preamplifier features selectable gain over a range of 20- to 65-dB with available P48 phantom power. For flexibility, an external source of audio, arriving by way of a Dante receiver (input) channel, can be used instead of the microphone input. This allows devices, such as wireless microphones, to be directly supported. A Dante transmitter (output) channel is provided as the main or “on-air” output. In addition, an analog microphone-level output is available to allow the unit to be integrated with analog inputs on audio consoles or remote I/O interfaces.

A stereo headphone output and associated rotary controls allows a user to create their own monitor mix. Each unit provides two Dante receiver (input) channels, typically used for their program or talent cue (IFB) input sources. In addition, each talkback channel has a Dante receiver (input) channel associated with it. This allows a Model 236 user to create an individual headphone mix from up eight audio inputs channels. In addition, a sidetone function provides the user with a microphone confidence signal.

Dual Gigabit Ethernet interfaces provide support for redundant Dante operation. Power can be provided by Power-over-Ethernet (PoE) or an external source of 12 volts DC. The unit is housed in a compact, rugged enclosure and provides all the resources required by one announcer or commentator. Two spare connector locations are available on the back panel, allowing installer-implemented options to be created. By simply adding an XLR connector the unit’s remote-control inputs and low-voltage DC tally output can be utilized.

The Studio Technologies’ STcontroller software application is used to configure the capabilities of the Model 232, Model 234, and Model 236. Configuration choices can be viewed and changed in “real time,” as well being saved and recalled as desired. Essentially every feature can be optimized to meet the exact needs of an application. For example, each talkback function can be configured for the desired button action and overall operating characteristics. This makes it easy to integration a unit with matrix intercom systems ubiquitous to broadcast facilities.

A special feature allows a talent cue (IFB) audio channel to be created within the unit. This capability, for use by the associated announcer or commentator in a REMI or At-home environment, would typically be created at a central broadcast facility. The Announcer Console units will also integrate with a number of other products from Studio Technologies. Many unique functions can be created utilizing high-frequency tones that are well outside of the voice range. These “status” tones allow IFB, on-air tally, and intercom call signals to be sent and received.

“There are not many applications that these units can’t support,” commented Gordon. “We’ve broken through the concept of the simple ‘talkback box’ by combining high-end audio quality with an extensive set of easy-to-deploy resources. These units simply perform beyond anything we’ve done before – and in a way that should please both engineering managers and on-air talent.”