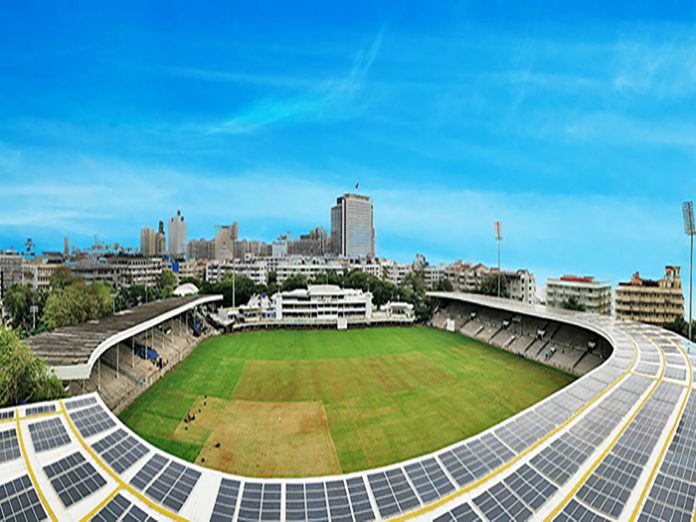 The project was executed by Tata Power Solar to provide solar rooftop solution for the stadium located at Mumbai and was completed in 100 days.

The installation of the solar rooftop project will help to generate over 1.12 million electricity per year which will lead to 25% of savings in the power consumption cost. At present on an average (apart from stadium floodlights, which runs on DG), the stadium consumes 4 lakhs kWh /month, but with solar installation, on an average basis, the consumption from the grid would fall to approx. 3 lakhs kWh/month. CCI will also be able to curb the emission of over 840 tonnes of carbon dioxide annually.

Mr. Praveer Sinha, MD & CEO, Tata Power, said: “We are delighted to partner with Cricket Club of India on the World’s largest solar-powered cricket stadium in Mumbai. We continuously seek to move ahead in  our renewable and sustainability objectives.”

With an aim to be environmentally responsible by reducing its carbon footprint, Cricket Club of India initiated a project to install 820.8kWp roof-mounted solar plant at the CCI stadium, Mumbai.

Speaking on the occasion, Premal Udani, President, CCI and Rakesh Kapoor, Vice Chairman of Infrastructure and Green Technology Committee, CCI explained: “We continuously look at projects which promote renewable energy focus, and are glad to partner with Tata Power Solar to execute this landmark project for us. They have delivered on the promise of the brand TATA. We have set an example to use rooftop space in the stadiums to help protect the environment.”

Tata Power Solar has commissioned more than 1.45 GW of ground-mount utility scale and over 220 MW of rooftop and distributed generation projects across the country till date. Tata Power Solar has been ranked #1 EPC rooftop solar player consistently for four years by BRIDGE TO INDIA, a leading cleantech consulting and knowledge services provider. The total installed capacity in the rooftop segment is over 220 MW as of 31 March 2018 including commercial, residential & industrial sector.