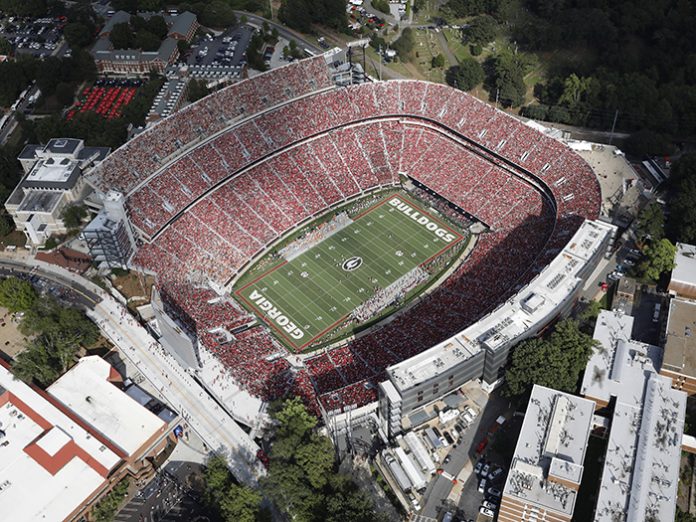 A new Artist 128 mainframe was installed in the central core that services Sanford Stadium and the Stegeman Coliseum and is linked via fiber to frames at the Foley Field baseball facility, the Jack Turner Stadium, the Turner Soccer Complex, the Gabrielsen Natatorium, and the William Porter Payne and Porter Otis Payne Indoor Athletic Facility. In addition, a Bolero wireless intercom system comprised of 15 beltpacks and seven antennas (some antennas are routinely moved to handle various other requirements) replaced a wired solution that was in place at several venues.

The new Bolero system integrates directly with Artist and enables all user groups, such as the band, cheer squad, DJ, operations team, and video control team, to communicate using a single system, without conversion or being on a party line. The solution has proven particularly valuable at the men’s and women’s basketball and gymnastics events where multiple wireless channels have replaced an existing party line setup.

“When it came time to upgrade our comms capabilities across campus, we knew we wanted to stay with Riedel and Artist. And then the introduction of Bolero made it a no-brainer,” said Mike Bilbow, Assistant Athletic Director, Digital and Production, University of Georgia Athletic Association.

“Bolero gives us so much more flexibility, and its reliability and sound quality are bar-none – both critical factors for events with 90,000 cheering fans. With many of our users connecting wirelessly now, we’re able to save money on cabling infrastructure. And it’s great to be able to salvo presets for each event, which frees up our engineering staff for other duties.”

“We were proud to partner with Alpha Video for all of the wireless and wired intercom for UGAA’s broadcast infrastructure expansion,” said Dave Caulwell, Regional Sales Manager, Northeastern U.S. at Riedel North America.

“We value and celebrate the trust that the UGAA has put in Riedel Communications, making us the heart of their broadcast communications network.”